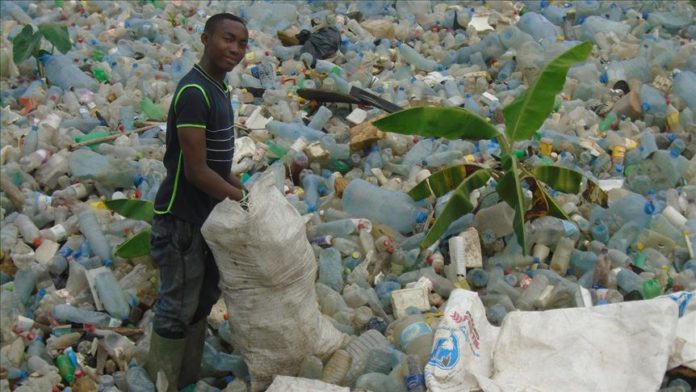 The plants in Tagne Jean Marie’s field have matured during the rainy season. But to achieve this, they had to withstand the dry season.

When Anadolu Agency met Tagne Rostand, the farmer’s son, he was collecting plastic bottles from a stream in Douala, the nation’s economic capital. The pond was filled with bottles, which made it difficult to see the surface.

It looked like the young boy was just cleaning up, but it was more than that.

He was clearing the stream of bottles that his father was going to use to irrigate his pepper field in the small town of Penja, located around 95 kilometers (59 miles) from Douala.

In the dry season, when plants need to be irrigated more frequently, the recycled bottles are attached to the pepper vines. Small holes in their caps allow the water they contain to be directed to the roots of the plants.

In a three-hectare field with around 2,000 pepper vines per hectare, each vine needs three liters of water per week or two water bottles attached weekly.

Tagne justifies this modest need for water with the fact that pepper growing is not demanding.

He said its growing area is not favorable for natural irrigation of the fields in the dry season, so this watering method remedies the lack of water and budget deficit from deploying field infrastructure.

Disgusted to see many pepper fields deteriorate because they are not prepared for the dry season, he came up with his innovative watering method and believes it will avoid disastrous scenarios.

His son said that during the current rainy season, they do not need this method, but it will be useful to them once the dry season arrives. He said the first experience has been very beneficial to them, so he will be going on a quest for plastic bottles again.

But it is not an easy activity.

When Jean Marie came up with the idea, he did not know where to find bottles. He then realized that the rains were draining the plastic bottles to the lower areas of some rivers in Douala. From then on, he hired his son and other people to collect them.

They pack the bottles in long bags and transport them by truck to Penja. The bottles can be used for more than three years.

To supply them with water, he uses tractors that carry water from cisterns to fill large cans for replenishing them.

He finds this deployment cheaper and more environmentally friendly than traditional watering methods.

In Cameroon, Penja pepper is a source of national pride and has an international reputation. The pepper, which is grown in volcanic soil, was one of the first African condiments to receive the Protected Geographical Indication (PGI) label from the African Intellectual Property Organization (OAPI). This allows its producers to sell it at competitive prices.

It is also one of the rare Cameroonian products to be labelled.

Only 30% of production is exported and the rest is sold on the local market.

Regarding the management of plastic bottles in Cameroon, since Oct. 24, 2014, a ministerial order requires manufacturers, importers and distributors of these containers to propose a policy for the management of their waste. Yet cities and marine areas in the country are heavily polluted with plastic bottles. Creative recycling efforts such as those of Jean Marie are welcomed by observers.