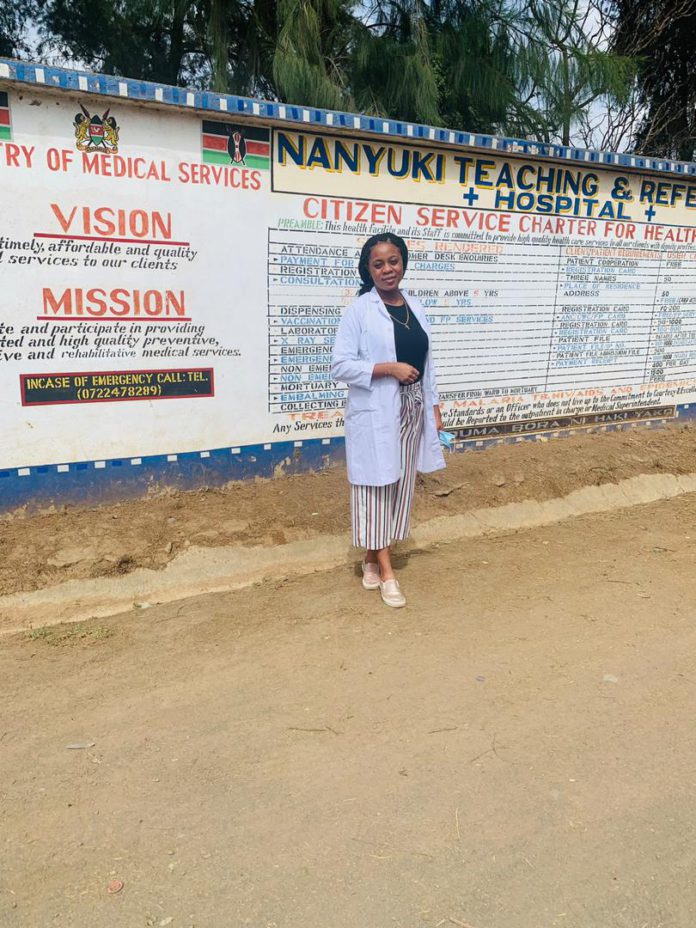 Her journey to becoming a doctor has not been simple but as the world celebrates International Women’s Day, her message for young girls is one of perseverance, tolerance and passion for one’s dreams.

She detailed to Anadolu Agency the hurdles she had to overcome since she left her native Cameroon to further her studies.

Life was hard with temptations such as prostitution and other vices, she said.

“I know sometimes we can lose everything trying to follow our dreams, but to all women out there, know what, it just takes one good woman to make the right thing and the rest will follow as a universal law, so never forget you are strong for you and for other women,” said the general practitioner.

She said she grew up with many issues because her parents divorced, namely family difficulties and being rejected by her father’s second wife.

After high school she told her father she wanted to study medicine abroad because overseas have better teaching methods and technology than in Cameron.

“My father was like: ‘No way.’ He said he cannot afford the fees for six years because he was retiring. I enrolled at a university because I enjoy physics. I fought with my father to pay my medical school fees but he said no,” she said.

Belinga secretly got part-time jobs to make money to pursue her dream of becoming a doctor. When the strain became too much, she approached her mother and asked for help to raise school fees.

“My mother, a primary school teacher, borrowed money from the bank and asked me to add to it and pursue my dreams,” said Belinga.

After raising funds for medical school, Belinga knew her problems were over and she left with the help of a traveling agency and moved to Dubai.

Optimistic and naïve, Belinga was excited when she arrived in Dubai and could not wait to go to the university she applied to through the agency.

She chose Dubai because it is a country where she could work part-time and still study to pay for school.

“The university didn’t even know who I was and I had no work,” said Belinga. She realized she had been conned.

The school had no records of her. She was stranded in a foreign country with no work and no money.

“I could not go home so I had to work part-time in Dubai to pay the money that my mum borrowed and the agency that took me here had stolen. It was very sad,” she said. “There was a lot of up and downs. I slept on the streets hungry without food for days but then I got friends who helped me.”

A Spanish student who speaks French and barely knew Belinda got her in contact with another friend in China who helped her secure a chance at a Chinese university.

She began her medical career in China but paying school fees was a challenge because she was not allowed to work as a student.

“My mom really helped me pay the fees in China. I struggled so hard to get where I am right now,” she said.

Belinga left China for an internship and found her way to Kenya where after evaluating all available options she found Kenya to have better health facilities and training compared to other African countries.

“So, searching for an internship I didn’t want to do it in Cameroon. My choice was between Ghana, Senegal and Kenya. I chose Kenya because Kenya was cheap and nice. Ghana was very expensive. I heard about Kenya’s medicine being good, they have good doctors. Also, COVID-19 played a role in me choosing Kenya because normally I would have done time in Europe and end in an African Kenya but due to worse COVID-19 statistics in Europe, I decided to come to Kenya,” said Belinga, who aspires to be a cardiothoracic surgeon.

In Kenya, Belinga’s routine involves going to Nanyuki hospital every day before turning up at a gym, among other activities.

“In Kenya, doing medicine as an intern you can touch patients. They give you more responsibilities unlike in many countries. Sometimes it is too much responsibility. In Europe and in China, and also back home in Cameroon, you will never ever touch the patient without the doctor in charge. They will just teach you — you will look at what they are doing without being practical, that was what was scaring me because you don’t have too much freedom to learn and practice in other countries, you just learn,” she said.