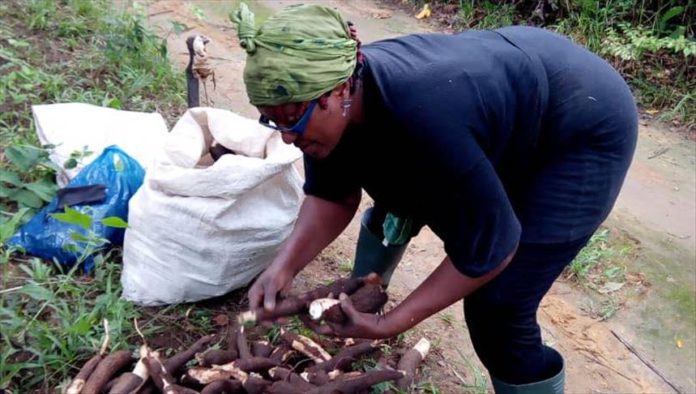 On eve of International Day of Rural Women being observed on Thursday, experts believe despite lending a critical role to the economy, the fate of hardworking rural women continues to hang in balance. The life continues to be hard and earnings are too meagre.

Away from the concerns and challenges thrown by COVID-19 pandemic, rural women say, their more concern is growing and then selling the morsel of food.

According to the Food and Agriculture Organization (FAO) estimates rural women are responsible for growing 90% of food consumed in Cameron. The UN estimates also suggest that women comprise 43% of the agricultural workforce in developing countries across the world.

Early in the morning, women travelling from rural areas can be seen in the main market in Mbanga, a small commune in the Littoral region, selling fresh vegetables and attempting to invite the attention of passers-by tossing flattering words.

Just at the entrance of the market, Michelle Judith in the middle of negotiations with two clients. Hailing from a nearby village, she has grown and is now selling vegetables to feed her family for over the past six years.

Odile Lutcha is a squash seed grower. But to shore up her economy, she also sells underwear alongside her fruit basket.

Sitting on the terrace of her house with a basket of seeds, she finds selling underwear that she imports from Douala more lucrative.

Speaking to Anadolu Agency in her modest living room, sitting on the floor, she said that she and her ageing mother harvest about 100 kilograms of seeds in a half-hectare field. “But sometimes that is not enough. So, for more seeds, I travel to other villages,” she said.

In Dibombari, a neighbouring commune, Ebouki Lea Louise, sells vegetables, fruits and other consumer goods for over the past 5 years. Although she claims earning a profit of $36 a month, the rainy season pours waters on her business.

Instead of selling her produce to middlemen, she travels to town and sells produce herself. “Because the city is very hectic there are more people and therefore the demand is higher and I get good money,” she said.

Aimee Murielle comes to this market to sell large local noodles that are very popular in the country. It is off-season, so she does not negotiate prices with customers.

Despite meagre incomes and scant resources back in their homes, they all prefer to live a rural life. They limit their activities in the city selling and supplying their farm goods. “It is nice to be in the city but very expensive. In the village, life is simple and we can save money and live better,” said Murielle.

Lutcha also feels at ease” in her village Mbanga, despite hardships, because she breathes pure air.

According to FAO estimates, rural women’s days in Cameroon are generally between 1.5 and 3 times longer than men. They have to divide their time, between working in the fields, growing grains and vegetable and then perform household chores.

While all these women are content in agriculture, they complain lack funds and access to techniques to improve the quality and quantity of their produce.

Lutcha said she wanted to grow more pumpkin seeds, but does not have money. Same is the case with Judith, who wants to start a plantation in her fields.