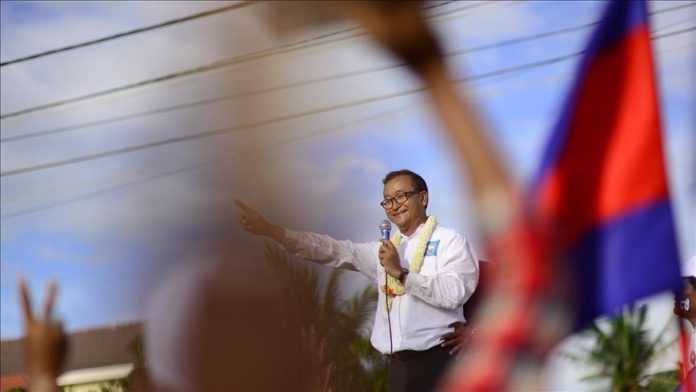 Sam Rainsy was charged with assault under articles 27 and 451 of the Penal Code in connection with an attempted coup to overthrow the legitimate government under a plot to return to Cambodia during the Nov. 9, 2019 events, according to the media outlet Fresh News.

In addition to criminal punishment, the court decided to completely deprive them of the “right to vote and the right to stand for elections,” it said.

Responding to the verdict, Rainsy, the interim leader of the Cambodian National Rescue Party (CNRP), said his sentence was simply “a political statement born out of weakness and fear.”

“Cambodian Prime Minister Hun Sen is afraid of any risk of my returning to the Cambodian political scene,” he said on Twitter.

Rainsy said Hun Sen also dreads the prospect of any free and fair election which would inevitably lead to the end of “his current autocratic regime.”

“Those who are persecuted by a Kangaroo Court under a dictatorship are true freedom fighters,” he added, referring to an unofficial court held by a group of people for the trial of those regarded as guilty of a crime or misdemeanor, especially without good evidence.

“Once again, Cambodia’s politically controlled judiciary makes a mockery of justice rather than defending it,” Robertson said in a statement.

Rainsy has lived in France since 2015 to avoid jail for several other convictions he says are politically motivated.

Hun Sen’s Cambodian People’s Party won all 125 seats in the National Assembly in the 2018 election soon after the CNRP was dissolved by the courts amid allegations that its leaders were plotting a “color revolution” designed to oust the prime minister.

On Nov. 9, 2019, Rainsy landed in Malaysia ahead of the anniversary of Cambodia’s independence from France. Rainsy and other opposition figures planned to visit Cambodia to stage demonstrations against Prime Minister Hun Sen, but the government banned his arrival.