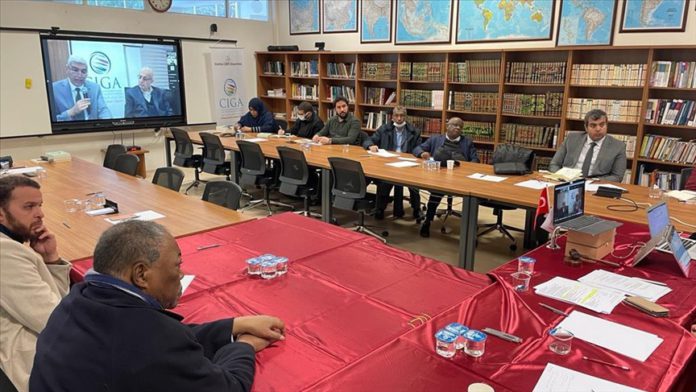 “That we are ‘callers of peace and towards righteousness’ was the clear message of Hasan al-Banna,” said Mohamed Gamal Heshmat of Canadian Institute for Strategic Studies and Development, referring to the Muslim Brotherhood founder who was a schoolteacher.

The three-day conference will brainstorm the Muslim Brotherhood’s experience in politics and governance in Egypt, said Sami Al-Arian, director of Center for Islam and Global Affairs, an Istanbul-based think tank and the host of the event.

The purpose of a state imagined by the Muslim Brotherhood, El-Barbary said, is to “please Allah.”

He said the Muslim Brotherhood, which has its roots in Egypt, believed a state has to gain foreign sovereignty which is to “attain independence from any foreign hegemony.”

In the next two days, the scholars attending the conference virtually from across the globe will address many aspects of the Muslim Brotherhood experience including the movement itself and the Egyptian state, Al-Arian said.

“We will see scholars discussing economic, social issues, the movement and society, the issue of civil-military relations, and national security besides foreign relations,” he elaborated.

The conference, which coincides with the 11th anniversary of 2011 Egyptian revolution, will also discuss what “lessons are learned and its future prospects” are.

The Muslim Brotherhood had won the first democratic elections of Egypt in 2012, when Mohamed Morsi was elected president. His government was toppled next year and Morsi was imprisoned where he died in 2019.