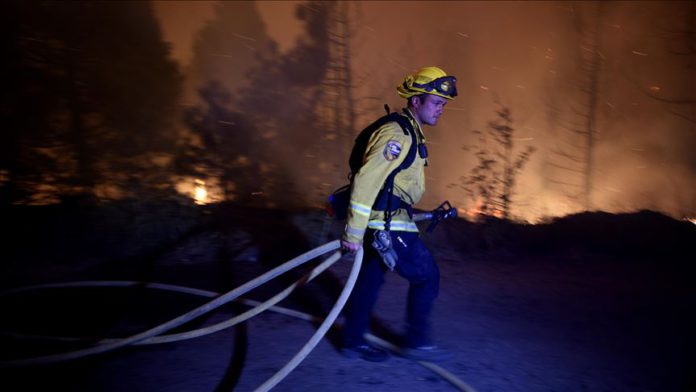 California Governor Gavin Newsom had an unequivocal warning for US President Donald Trump on Monday, telling him “climate change is real” as the president sought to pin blame for the state’s historic wildfires on poor forest management.

Newsom acknowledged that more should be done to regulate forests, saying “we have not done justice” on clearing dead trees and debris, but he adamantly insisted climate change not only exists, but is a driving factor for the state’s continual wildfire woes.

“We obviously feel very strongly that the hots are getting hotter, the dries are getting drier,” Newsom told Trump during a briefing on the ongoing infernos. “Something’s happened to the plumbing of the world and we come from a perspective, humbly, where we submit the science is in and observed evidence is self-evident that climate change is real and that is exacerbating this.”

Trump has long cast doubt on the existence of climate change, and his administration has taken measures intended to rollback environmental protections that were established to combat the worsening phenomenon.

Notably Trump decided to leave the 2015 Paris Climate Accord, which was brokered to reduce global greenhouse gas emissions in a bid to slow Earth’s warming, and the accompanying extreme weather and natural disaster events.

The president continued to downplay the significant of climate change, telling officials during the briefing “It’ll start getting cooler. You just watch.” Wade Crowfoot, California’s secretary for natural resources, quickly retorted “I wish science agreed with you.”

Asked by Newsom to respect “the difference of opinion” on climate change, Trump said “Sure. Absolutely.”

Upon arriving in northern California, Trump suggested that downed trees “just explode” during wildfires, adding “when you have years of leaves, dried leaves on the ground it just sets it up, it’s really a fuel for a fire.”

“So they have to do something about it,” he continued.

During Monday’s briefing, Newsom said over 50% of the state is federally-protected forest, imploring the president for additional national assistance to better manage the forests and combat the fires.

At least 21 people have died in 2020 as the state’s infernos continue to rage, according to the Department of Forestry and Fire Protection, or CalFire. The largest existing firestorm, the August Complex Fire, has scorched 755,603 acres and is just 30% contained.

In all, California has lost over 2.2 million acres and nearly 5,000 structures so far this year, and the wildfire season traditionally does not conclude until October.