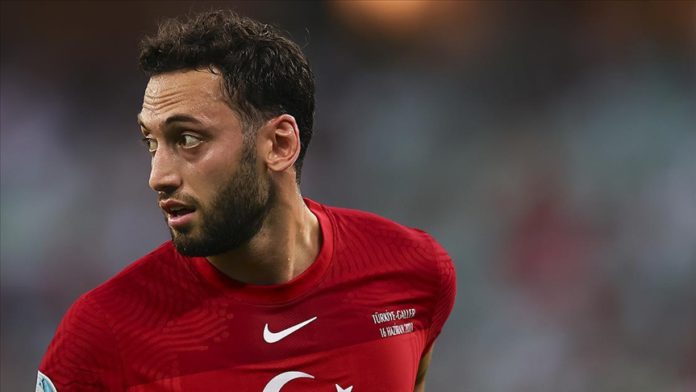 Turkish midfielder Hakan Calhanoglu on Tuesday joined Inter Milan from their city rivals AC Milan, joining the ranks of players who have taken the pitch for both Milanese football clubs.

But he will play for the Nerazzurri in upcoming seasons. Inter said Calhanoglu signed a deal until 2024.

Nerazzurri is Inter’s nickname. Similar to AC Milan, it signifies their colors — the Black and Blues.

The rivalry has been fierce for at least a century.

The clubs share a gigantic Milan stadium. AC Milan has been calling it San Siro but Inter named it Giuseppe Meazza.

San Siro is the district of Milan but Giuseppe Meazza is an Inter legend who played for the Nerazzurri from 1927-1940 with a brief stint in AC Milan. Meazza retired at Inter in 1946.

It is not rare for players to go to rival clubs. Many have done it as Calhanoglu was not the first player to play for both Milan clubs.

He won four Italian Serie A titles, three with Inter.

Ibrahimovic plays for AC Milan despite his advanced age. Before his return in 2020, he played for Paris Saint-Germain, Manchester United and the Los Angeles Galaxy.

Ibrahimovic racked up 66 goals in 117 appearances for Inter.

Following a 2002 FIFA World Cup triumph with Brazil, he made his way to Real Madrid in Spain.

When his Spain days ended, the ex-Brazilian star returned to Italy in 2007 and was signed by AC Milan.

He scored 59 goals in 99 matches for Inter. But his AC Milan career did not compare. He had nine goals in 20 appearances.

Ronaldo retired in 2011 and is currently President of Real Valladolid, a club in Spain.

He was 19 when he signed with Nerazzurri. But he faced unsteady days at Inter as he was loaned to Reggina and Brescia to gain experience.

Famous for his playmaking and passing skills, Pirlo piled up 40 appearances for Inter and tallied 41 goals and 70 assists in 401 matches for rivals AC Milan.

He retired in 2018 to coach Juventus last season.

Juventus sacked Pirlo in May after a disappointing season as Inter were crowned 2021 champions, ending Juventus’ nine years of dominance.

Then he moved to AC Milan, where he played for 10 years.

Playing in the center of the pitch, Seedorf scored 14 goals and had 11 assists in 93 matches for Inter.

Italian legend Baggio plays for Milan, Inter for 2 years each

The former Italian international scored 17 goals in 59 matches for Inter.

He played for AC Milan and Inter but spent most of his time at Juventus from 1990-1995.

Baggio was a two-time Italian champion; 1995 with Juventus and 1996 with AC Milan.