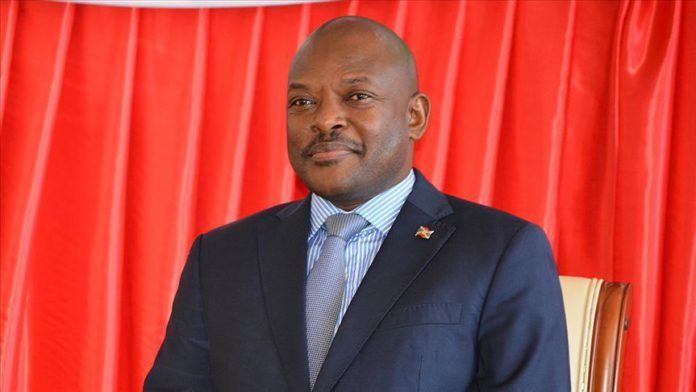 Burundi President Evariste Ndayishimiye Friday told thousands of people gathered at a stadium in the administrative capital Gitega that he had lost “a great advisor”, referring to his predecessor Pierre Nkurunziza.

Nkurunziza died on June 8 due to heart attack, according to the government.

He was 55, and died days after the May 20 election was won by Ndayishimiye, his preferred successor.

In a speech at the Ingoma packed stadium in Gitega, Ndayishimiye, who was sworn on June 18 at the same stadium, pointed out that he had lost “a great adviser.”

“You leave me a great burden to develop the country,” he said.

Nkurunziza was Friday laid to rest at a recently built monument in the Gitega city center.

Foreign delegations from Tanzania and Congo Brazzaville among others attended the ceremony.

Former Burundi presidents Domitien Ndayizeye and Sylvestre Ntibantunganya were in attendance as was main opposition National Congress for Liberty leader Agathon Rwasa, who was the main challenger in last month’s election.

The casket containing Nkurunziza’s body draped in a national flag arrived at the stadium from the hospital in the central city of Karuzi amid heavy security.

Thousands of Burundians, including students, lined the road to Gitega as the funeral procession made its way to the stadium.

Guests bowed in respect as the procession passed by.

Nkurunziza became president of Burundi in 2005 after being voted by the parliament.

He was re-elected in 2010, and in 2015 when he won a controversial third term despite opposition protests and international condemnation.

Nkurunziza’s candidacy had been condemned as unconstitutional by the opposition, sparking months of protests and an attempted coup in mid-May of that year.

But the government dismissed international criticism when the US, EU and former colonial power Belgium described the election as “not credible”.

Born in Bujumbura, Burundi, Nkurunziza was a former teacher and former leader of a Hutu rebel group.

He was a born-again Christian and football fanatic.

In a surprise move in June 2018, Nkurunziza announced he would not run in the 2020 elections, despite a referendum that could allow him to rule until 2034.

But Nkurunziza faced the daunting task of maintaining peace and stability in the country.