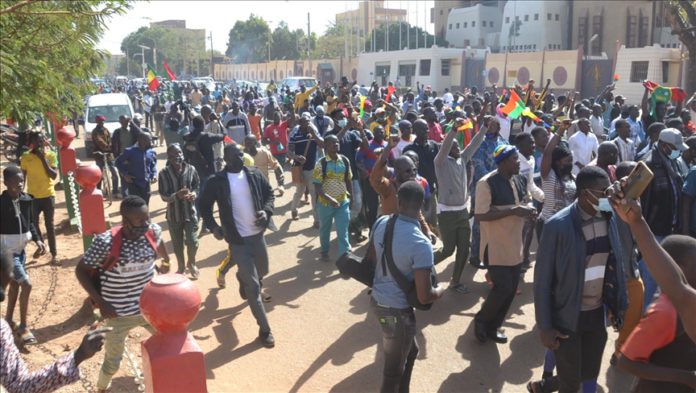 Burkina Faso’s self-proclaimed president invited the international community Thursday to help the country out of its crisis while pledging a return to normalcy in the wake of a coup.

“When the conditions are met according to the deadlines that our people will have sovereignly defined, I commit myself to a return to a normal constitutional life,” said Lieutenant-Colonel Paul Henri Sandaogo Damiba in his first official address on national television.​​​​​​​

Damiba led a coup Monday by a group of military officers called the Patriotic Movement for Safeguarding and Restoration (MPSR) that overthrew President Roch Marc Christian Kabore, the democratically elected head of state, who was enjoying a second term in the West African country.

For the new leader, the main priority in Burkina Faso “remains security.”

Damiba said he wants to significantly reduce the areas under terrorist influence and the impact of violent extremism by restoring the will to fight with adequate means to the defense and security forces as well as to the volunteers for the defense of the homeland.

“This is a prerequisite for the gradual return of the public administration and the resettlement of internally displaced persons in their villages of origin,” he said, calling on the international community to accompany the country in a rapid exit from the crisis.

He promised to respect human rights, ensure strict respect for an independent judiciary and to be tough on all those who are guided only by their selfish interests.

Damiba announced a draft roadmap that will be agreed with the nation’s forces that he intends to federate.

He made the announcement in a context where the international community, the Economic Community of West African States (ECOWAS) and the African Union, of which his country is a member, have condemned the coup.

These communities as well as international leaders have called for a return to constitutional order, the release from detention of Kabore and the military’s return to their barracks.

The advent of the MPSR was imposed in a country weakened by so many events and beset on all sides by radical armed groups, according to Damiba.

The situation has imposed on the army “an attitude that is imposed by its duty,” he said.

The latest coup in Burkina Faso comes after the 2015 attempt against a transitional government and a few days after the arrest of a group of military personnel suspected of planning a coup but also following demonstrations by people dissatisfied with the security crisis’s management after recurring attacks by terrorists leaving many civilians and military members dead.

On Sunday, a mutiny also broke out in the military barracks, creating a situation of uncertainty in the country.

While the African Union and ECOWAS condemned “an attempted coup” in their respective statements, the next day, the MPSR confirmed Kabore’s overthrow.

The junta announced live on national television that it had suspended the constitution and dissolved the National Assembly. It also ordered the closure of the country’s borders and imposed a curfew. A presenter read out a letter Monday evening on state television purportedly written by Kabore to announce his resignation.