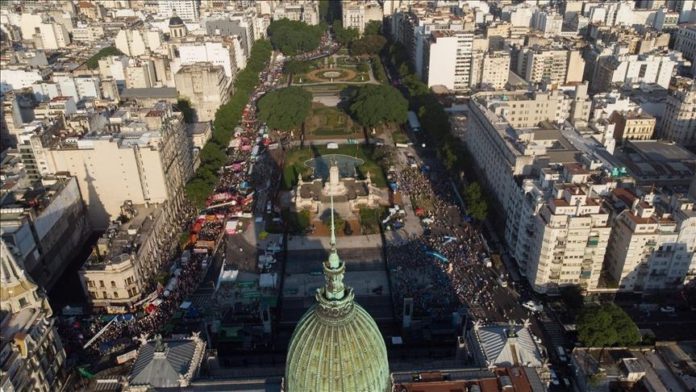 Amilcar Ortega planned to travel to see friends and family after leaving the crisis engulfing Venezuela, and it began in the mountains of Cordoba, Argentina.

On arrival, he wanted to stay longer.

But at the migration office he found out there was a nine-month wait — an issue for Ortega because he was only allowed three months on a tourist visa.

“I left for Sao Paulo just days before my visa expired and tried my luck there,” said the Venezuelan content developer and author.

Despite enjoying the city’s vibrancy, as a writer who needed to be able to communicate, Portuguese proved difficult for the Spanish-speaker, so he returned to stay temporarily in Argentina before moving to his next destination.

But then COVID-19 struck.

“The lockdown here was really strict. Almost militaristic,” said Ortega, who spent most of his time inside working on a long-term project. “I only went out to buy groceries and such and it was heartbreaking to see such an active city reduced to a standstill.”

Before the pandemic, he said, the city’s cultural vibe was outstanding, “but it seems to be the last thing that’s going to return.”

The lockdown in Buenos Aires was eventually lifted on Nov. 6.

Despite seeing small gatherings, Ortega said larger gatherings like concerts and theatres, famous in Buenos Aires, are still not taking place due to coronavirus restrictions.

Others like Patrick Denison from the UK have experienced changes.

“I don’t go out as much as I don’t want to infect myself. I haven’t traveled for a year. It’s tough not being able to go out,” said the 31-year-old who has remained in Buenos Aires.

He is trying to combat it by gaining more students and learning computer programming as a back-up option.

Following the pandemic, Denison said there are more visible signs of poverty, with those less fortunate being hit hard.

He said there are also security issues. “Until this pandemic, I’d never seen a crime committed here. Since the pandemic, I’ve witnessed two robberies and my friend was robbed at gunpoint.”

In Argentina, he said those without papers tend to border hop, renewing tourist visas in Brazil or Chile before returning to Argentina, while others sometimes overstay tourist visas, paying fines when they leave the airport.

Now Argentina, already hard-hit by a recession before COVID-19, is seeking to attract those who may wish to stay longer.

Buenos Aires authorities are set to offer special visas to attract 22,000 digital nomads by 2023, estimating a little less than $140 million injection into the economy.

“I understand the crisis my country is experiencing and the government’s desperation to get dollars from abroad. From my point of view, this initiative has more to do with that than with the motivation to modernize,” said Sofi Caamano, Argentine freelance graphic designer.

Caamano, 33, who has visited 30 countries in the last eight years, returned from India to her homeland in the middle of the pandemic. “For those of us who are used to living on the move, it was a very hard blow, between stillness and confinement, it was a time to rethink and shake-up plans.”

She suggested that security could be an issue when it comes to Buenos Aires positioning itself “as a strategic point for digital nomads” but describes the city as dynamic with plenty to offer in terms of culture and gastronomy.

Others have had to adjust, like Stefania Guglielmi, a full-time nomadic travel blogger from Bologna in Italy, currently in Georgia.

She said many digital nomads have lost clients, or have often had to “pivot” toward new opportunities. Since 2015, the 31-year-old has visited more than 45 countries, including Argentina, before the coronavirus hit.

Despite enjoying the “beautiful country” for three months as a tourist, she encountered aspects that could be improved, describing Argentina as the “most difficult one to set up as a digital nomad.”

She experienced issues with SIM cards not offering sufficient gigabytes to work online and said long-term accommodation leases are impossible to secure — forcing her to use “overpriced” rentals.

Guglielmi had difficulties in paying by card and banking issues in a country with tight currency controls. “The ATM won’t allow you to withdraw more than $100 at a time, with huge fees, I remember it being around $15 with a foreign card.”

She fears Argentina’s high tax rate, describing it as a “huge con for digital nomads who want to stay for over six months.”

Nevertheless, Guglielmi is open to returning in the future with her Argentine partner.

Others like Gary Spagnoli, founder and CEO of a digital marketing agency, had fewer difficulties.

Originally from New York, Spagnoli has visited about 25 countries since 2013. Pre-pandemic, he and his girlfriend would leave their Chicago base, taking “work vacations in new locations throughout the world.”

The couple visited Argentina in early 2020 before the pandemic, basing themselves in the trendy neighborhood of Palermo in Buenos Aires.

Spagnoli enjoyed the multicultural aspect of Buenos Aires, the closer time zones to the US compared to Europe and Asia for work, and took advantage of a close inner-city airport for weekend-escapes to Mendoza, Patagonia and Uruguay.

However, for nomads potentially flocking to Argentina, Spagnoli said, the “affordability” of flights is a “challenge.”

“I absolutely love the people, the culture, the weather, and appreciate all of the entertainment options in the city, along with the affordability in comparison to many expensive cities in the US,” he said.