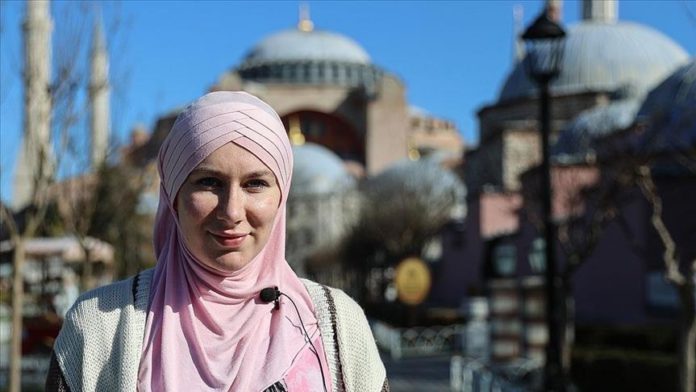 Influenced by the ambience of the iconic Blue Mosque, also known as the Sultanahmet Mosque, in Istanbul during a Turkey tour two years ago, a young British woman began her research about Islam and later dedicated her life to promoting the Muslim faith.

Aisha Rosalie, 24, told Anadolu Agency the story of her life — from being a person who lived with the dream of becoming an actress to the moment she discovered Islam in Istanbul.

“Before I became a Muslim, I didn’t have any religion. I believed that there was a God. I remember as a kid I used to always talk to God,” she said.

Rosalie said her parents “were not religious”, adding that she never really knew any religious people before converting to Islam.

“When I came to Turkey, I didn’t have an intention to find religion. I went on Google and I found they have a Blue Mosque and thought maybe I can check it out,” she said.

Rosalie said that she was “really scared” because she had “not a good opinion” about Muslims, as all her information came from Western media.

“That was the only sort of opinion of Islam I had.”

Before visiting the mosque, she went to a local shop and bought a hijab, or head covering, as she “wanted to be respectful.”

“I didn’t want to offend anyone by having my hair out. I thought maybe the people would be angry on me. So I bought a hijab just to visit [the mosque],” she said.

She said she came across religious material on Islam, but at that time she did not know what it meant.

“And I even didn’t know how to pronounce it.”

Once I entered the Blue Mosque, Rosalie said, I took the tasbih, or prayer beads, and started reciting some prayer.

“Like for an hour I just sat doing tasbih. I just was looking around the mosque. It was so beautiful and so peaceful, I just couldn’t believe it. And I was watching people praying in the area in front of me. I was so overwhelmed by the beauty and the peace inside the mosque. No one was shouting at me, no one was being mean to me, I was so shocked,” she said.

Rosalie said she looked for copies of the holy Quran after leaving the mosque on the way to the hotel.

“And I thought to myself maybe I’ll pick one and have a read,” she said, adding that she bought an English translation of the Quran and started reading it at her hotel room.

Rosalie said she kept reading the Quran even after returning to the UK until she finished the whole book.

“It took me a couple of months, and during that time I did a lot of studies into Islam, as well as watching a lot of lectures. And after a couple of months I declared my Shahada [Muslim profession of faith], and I became a Muslim. Alhamdulillah [praise be to Allah], that was my journey,” she said.

‘Everything changed in life’

“Everything changed in my life,” she asserted.

Noting that her family “was very unsure” about her decision on converting to Islam, Rosalie said her mom used to surf the internet looking for the information on Muslims, and was sharing it with her.

“It forced me to learn more to make her sort of understand the beauty, the peace, everything behind Islam,” she said.

Rosalie underlined that she thinks that personal character is the “best form” of Dawah, or call to Islam.

“It is the best way to bring people towards the religion. Because I think through my character I helped her to understand the beauty of Islam. I talked to her more, I tried to be more generous with her […] because in our religion it is important.

“We got parents. We have to look after them, we have to be good with them.”

Rosalie highlighted that coming to Turkey was “one of the main reasons” why she became a Muslim.

“It is because I saw good Muslims, people with good character. They made me think ‘I want to be that person.’ It made me better. It made me happier. I felt like I was born again. I wanted to start fresh. I wanted to leave my sins behind,” she said.

Speaking about her life before converting to Islam, Rosalie said she was trained to be an actress.

Noting that it was her “dream” for the longest time, Rosalie said she started acting when she was 14.

“So, I’ve been acting for a while and I’ve been trained in LA, I lived in America. That was my whole lifestyle, that was my dream for ages. I did some scriptwriting, and I did some directing as well.”

After converting to Islam, she left that dream to pursue her YouTube channel where she posts Islamic content.

“I want to help people to come more towards the religion. And I post a lot of convert stories there as well. So, [promoting] the things that will help people in their religion is my aim,” she said.

Speaking at Istanbul’s landmark Sultanahmet Square, she said: “I absolutely love being here. It is the place where I discovered Islam. It was the first Muslim country I ever went to.”

“I came back here for a reason. I came back with my husband and I wanted to show him the amazing places in Istanbul, in Turkey. And the people here are so incredible. It’s so beautiful here, it’s so amazing,” she concluded.