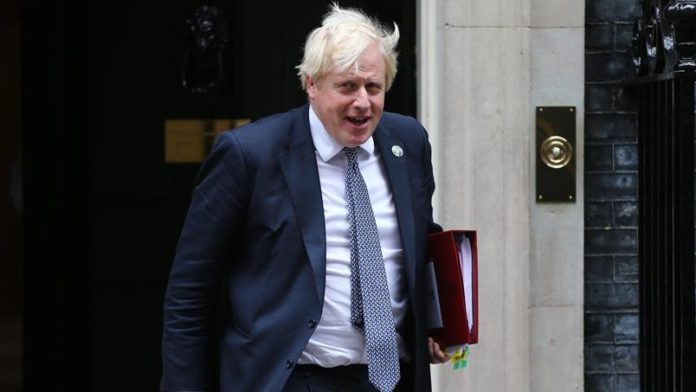 British Prime Minister Boris Johnson urged Russia on Thursday to de-escalate tensions on its border with Ukraine as military exercises are underway in neighboring Belarus.

In a meeting with his Polish counterpart Mateusz Morawiecki, Johnson made clear the only solution to the crisis is through diplomatic dialogue and that a threat to European security is a threat to global security. ‘

“The message I have been giving to all our counterparts is that we need to work together now to achieve de-escalation, to persuade Vladimir Putin to de-escalate and to disengage and as we tirelessly pursue the path of diplomacy to bring an end to the tensions on Ukrainian borders. It’s important to remember why we’re doing this,” said Johnson.

“We won’t accept, Poland and the UK won’t accept a world in which a powerful neighbor can bully or attack their neighbors and we won’t accept because we believe all people no matter where they are born have a right to live safely, to choose who governs them and to decide what organizations they aspire to have membership of or indeed what bodies they want to cease being members of,” he said.

Johnson made clear the UK’s “unwavering” commitment to Poland, using the deployment of an extra 350 troops to the eastern European country, which arrived early Thursday, is an example of London’s alliance with Warsaw.

Morawiecki and Johnson discussed the importance of a united European front in the face of Russian aggression and military posturing on its eastern borders. The two leaders also agreed that European security was vital to global security.

“The political objective of Putin is to dismantle NATO, this is why we have to be very determined in showing how coherent the alliance is, how much we stand together and we understand the tensions on the eastern flank very well, we have to show that,” said the Polish prime minister.

The British government launched a diplomatic offensive in recent weeks to diffuse tensions between Russia and Ukraine as well as with the NATO alliance.

Johnson visited Ukraine where he held a news conference with President Volodymyr Zelensky and visited Brussels and Warsaw on Thursday.

At the same time, Foreign Secretary Liz Truss visited Moscow and held urgent talks with Russian Foreign Minister Sergei Lavrov to bring Russia back from the brink of war and to find a diplomatic solution.

The British government has warned Moscow against any invasion and incursion of Kyiv, threatening it with further sanctions and a swift and unified response from NATO.

Russia launched a much anticipated military exercise Thursday with Belarus. The drills are viewed with increasing concern by the West who see it as a possible excuse for an invasion of Ukraine.

Russian President Vladimir Putin has called the maneuvers military exercises and has rejected claims of a Russian invasion but has warned NATO against further expansion in what it sees as its region of influence. ​​​​​​​

Moscow has amassed more than 100,000 troops on its western border with Ukraine. It has also deployed forces in Crimea in the south and Belarus in the north.

'Turkiye against every move that would target Ukraine's territorial integrity'