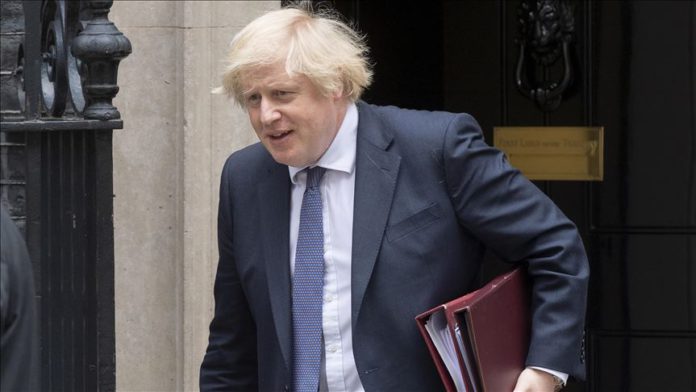 British Prime Minister Boris Johnson visited Northern Ireland on Thursday and met with leaders there as well as Ireland’s Taoiseach, or prime minister.

Northern Ireland was formed in May 1921 after the partition of the island of Ireland.

Johnson said: “As the country begins to get back on its feet in the wake of coronavirus, we cannot simply strive to rebuild, but we must commit to building back stronger than ever.

“I cannot overstate how important the close co-operation that we have seen between central and devolved government will continue to be to this.

“As we mark 100 years since the creation of Northern Ireland, it is important that we celebrate its people, culture and traditions, along with its vital contribution to the United Kingdom.”

The British government said it had protected over 316,000 jobs in Northern Ireland over the course of the pandemic, and would give the Northern Ireland Executive a further £2.2 billion in additional funding this year for its response to COVID-19.

Northern Ireland Secretary Brandon Lewis said: “I am delighted that the Prime Minister is in Northern Ireland, and has announced the first stage of our plans to mark this centenary.

“This is a fantastic opportunity for people right across the UK to celebrate Northern Ireland and its integral place within our Union. We will use the centenary next year to promote it on the world stage.

“The establishment of a Centenary Forum and Centenary Historical Advisory Panel will offer us the opportunity to work with a broad spectrum of people, including those from across the political parties, business, tourism and the voluntary and community sectors, to deliver an ambitious and exciting programme of events to mark this significant national anniversary for the UK.”

“It’s great to see you Taoiseach, it’s great to be here in Northern Ireland, and we look forward to developing our relationship in all sorts of ways – east-west, north-south, you name it,” Johnson said.

Martin said: “It is important for us both in terms of the British-Irish relationship which has been the cornerstone of much progress on the island of Ireland and between our two countries for well over two to three decades, and we want to maintain that.”

“It is challenging times ahead with COVID, Brexit, all of that,” he added.

On Brexit, Martin said he wanted a tariff and quota free deal as soon as possible.

“It seems to me that there is a landing zone if that will is there on both sides, and I think it is,” he said.

“My own gut instinct is that there is a shared understanding that we don’t need another shock to the economic system that a sub-optimal trade agreement would give alongside of the enormous shock of COVID,” he said.