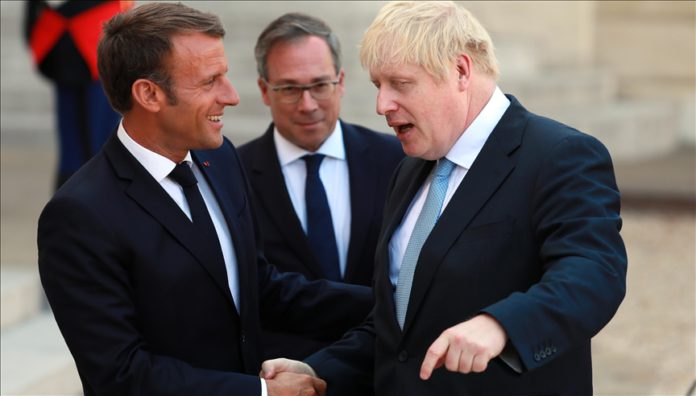 British Prime Minister Boris Johnson and French President Emmanuel Macron discussed the situation in Ukraine over phone on Saturday, according to a 10 Downing Street announcement.

Johnson and Macron updated one another on their respective discussions with international partners, including the former’s Feb. 1 visit to Kyiv.

They agreed that finding a diplomatic solution to the current tensions must remain the “overriding priority.”

The leaders said “NATO must be united in the face of Russian aggression,” and agreed to continue to work together to develop a “package of sanctions” that would come into force immediately should Russia further invade Ukraine.

Russian forces in 2014 invaded the Donbas region in eastern Ukraine and annexed the Crimean peninsula.

It is now said to have amassed thousands of troops near Ukraine’s borders, prompting fears that it could be planning another military offensive.

The US and its allies have warned of an imminent attack and threatened Russia of “severe consequences.”

Moscow has denied it is preparing to invade Ukraine, and said its troops are there for exercises.

“The leaders discussed their work to strengthen NATO’s Eastern flank, ensuring that allies are fully defended against malicious Russian activity, wherever and however it might occur,” the readout said.

Johnson also reiterated his “commitment to work with France on the shared challenge of illegal migration” in the English Channel.

Macron is set to travel to Moscow on Monday and Kyiv on Tuesday to try to deescalate the crisis conflagrated by Russia’s military buildup around Ukraine’s borders.

He has repeatedly expressed concern about the situation on the ground and held multiple phone exchanges in recent days with his Russian and Ukrainian counterparts, as well as with US President Joe Biden.