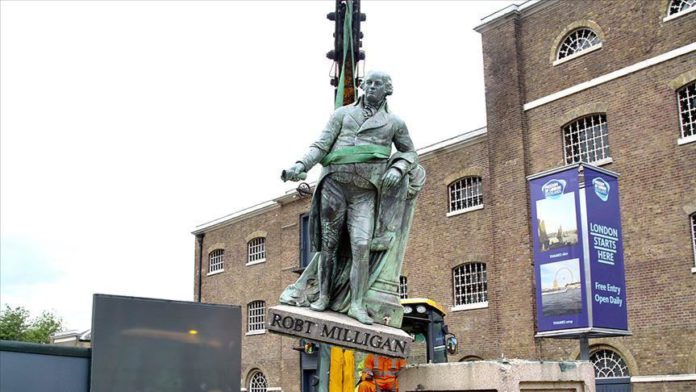 The killing of George Floyd, an unarmed black man, by a white police officer in the US last month has sparked a debate about Europe’s dark colonial past and its history of racism.

Statues of slave traders or slave owners, especially in the UK and Belgium, were targeted in recent protests against racism.

Protesters tore down the statue of 17th century slave trader Edward Colston and dumped it in River Avon in Bristol on Sunday.

Colston transported around 100,000 African slaves. He was a native of Bristol and an active philanthropist in his home city. Due to his charitable contributions, several roads, schools and other landmarks are named after him.

Some 20,000 Africans lost their lives during the sea voyages; many of their bodies were thrown in the sea.

The demonstrators spray-painted “Black Lives Matter” on the chest of the statue, a reference to symbols branded on slaves.

Some activists in the UK have published a list of 60 people linked to the country’s history of slavery.

A statue of 18th century British slave trader Robert Milligan was also removed from outside the Museum of London Docklands Tuesday afternoon.

Milligan was not a prominent figure in the slave trade, but the day he died, he owned more than 500 slaves at his sugar plantations in Jamaica.

The country, which entered slave trade in the 16th century, carried more than 3 million Africans beyond the Atlantic until it abolished slavery in 1833, according to data in the British national archive.

Anti-racism protesters are targeting anyone who promoted slavery.

Some activists even targeted the statues of Christopher Columbus, who is thought to have left behind a legacy of colonialism.

Cecil Rhodes (1853-1902) is one of the most controversial names in slave trade, whose statue in Oxford University has drawn the ire of protesters.

The businessman and politician, who played a major role in the colonization of South Africa, is known as the “mastermind” of apartheid in the country.

Admiral Horatio Nelson (1758-1805), one of England’s national heroes, is also targeted by activists because he opposed the abolition of slavery.

The protesters also demand the statue of King Charles II in London’s Soho be removed. He was founder of The Company of Royal Adventurers of England Trading to Africa, responsible for slave trade from the African continent to the Atlantic for many years.

South African soldier and politician Jan Smuts (1870-1950) is also on target with his statue across the British parliament.

Another statue that activists want to be removed belongs to the British General Lord Kitchener, who also served in South Africa.

Statues of pirates and explorers, such as Capts. Francis Drake and James Cook are also on the target.

Meanwhile in Belgium, a statue of Belgian King Leopold II was removed from a public square in the city of Antwerp on Tuesday.

Red paint was poured on another statue of Leopold on the outskirts of Brussels on Thursday in an act likely inspired by the Black Lives Matter protest, while thousands of people signed an online petition over a week calling for the removal of all his monuments.

The king is believed to be responsible for the death of millions of people in the Belgian colony of Congo Free State between 1885 and 1908, which was treated as the kings’ personal property.

The Democratic Republic of the Congo gained its independence in 1960.

Leopold’s administration used exceptional cruelty against locals working on rubber plants, such as cutting off their hands for low productivity.

Despite his cruelty, Leopold is one of the most highly praised Belgian monarchs, known as the builder king who contributed to the prosperity and development of the country during his reign from 1865 to 1909.

Several streets, squares and parks honor him across the country and many Belgians believe he should not be discarded from the country’s history despite the colonial controversy.

* Writing and contribution by Iclal Turan

China ‘ready’ to include ASEAN in $2B COVID-19 aid