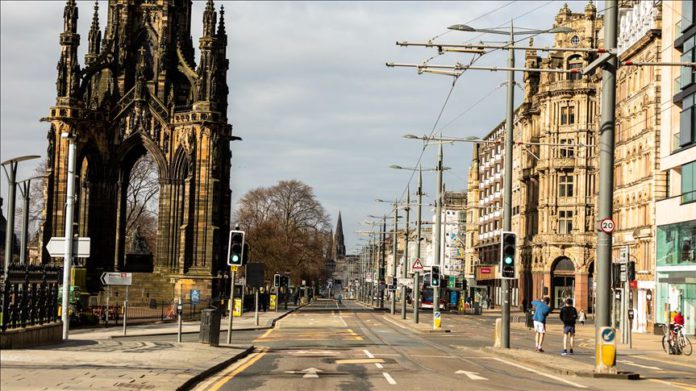 A majority of Scots now back independence from the United Kingdom of Great Britain and Northern Ireland.

Both Brexit and the coronavirus pandemic have exacerbated longstanding tensions between Scotland and the rest of the UK, particularly England, and threaten the continued existence of the union.

A recent poll gave Scottish independence an eight-point lead, with 54% in favor of a Yes vote and 46% backing a No vote.

Just as significantly, support for independence has been greater than maintaining the union for over six months – the longest period on record.

The center-left separatist Scottish National Party that governs Scotland is also looking stronger than ever.

The poll was carried out by Panelbase for the Sunday Times.

Writing in the Sunday Times, esteemed polling expert Sir John Curtice said: “Never before have the foundations of public support for the Union looked so weak.

“Our latest poll from Panelbase confirms other recent polling that has suggested those who intend to vote Yes in a second independence referendum have nudged ahead.”

“Support for the SNP is also at a record high. Panelbase’s polls conducted over the past six months, including today’s, have on average put ‘Yes’ at 51% and ‘No’ at 49%.

“This is the first time in polling history that ‘Yes’ has been ahead over such a sustained period.

“Support for independence is up three points on that recorded on average last year – and six points on 2018,” he added.

Scottish First Minister Nicola Sturgeon, who hails from the SNP, has previously called for a second independence vote by the end of the year but needs London’s approval to make it legal.

The 2014 Scottish independence referendum resulted in a 55% No vote beating a 45% Yes vote.

The national UK government led by Prime Minister Boris Johnson of the center-right Conservative Party has refused to grant a second vote.

The SNP and the Conservatives have swept the majority of seats in Scotland and England respectively in the last few elections, placing the two parties – and countries – on a collision course.

The poll, which surveyed 1,026 Scottish voters, also found that Scots trusted the Scottish government’s handling of the coronavirus pandemic far more than that of the UK government.

Sturgeon’s approval rating on the coronavirus was 60 points. Johnson’s, meanwhile, was minus 39 points – 99 points behind.

“For many nationalists, the last three months have exemplified how Scotland could govern itself better as an independent, small country,” Curtice said. “But more importantly, it may have persuaded some former unionists of the merits of that claim too.”

SNP deputy leader Keith Brown said “the majority of polls since the Westminster election have had ‘Yes’ in the lead – majority support for independence is now the established position of the people of Scotland.”

“On the basis of this sustained record support, it’s impossible for the UK government to deny Scotland a choice over its future,” Brown said.

“This out-of-touch Tory [Conservative] government exemplifies the very worst of the Union, and Boris Johnson may be the best recruiting tool for Scottish independence since Margaret Thatcher.

“The focus of the Scottish government remains on tackling the coronavirus pandemic. This poll shows Nicola Sturgeon’s approval rating is three times that of Boris Johnson.”

“While the SNP take absolutely nothing for granted, these polls do make for positive reading ahead of the Holyrood election in 2021,” he said.

The poll showed that as things stand, the SNP would gain a further 11 seats in the Scottish parliament, known colloquially as Holyrood, bringing their numbers to 74 MSPs out of 120.

The pressure is now piling on Sturgeon to deliver independence, especially within her own party.

SNP MP and former Scottish justice minister Kenny MacAskill called on his party to plan for a second independence vote and set out what an independent Scotland would look like.

“Ever since December 2019, the country’s trajectories, which were already diverging, have widened,” he said. “We have a government delivering Brexit against the wishes of the people of Scotland. It shows Scotland faces a bleak future within the Union.”

“For three months, if not beyond, tools have been downed on the Yes side. Meanwhile, the little-Englanders and the Brexiteers have unashamedly continued,” he said.

“The people of Scotland are entitled to a referendum. The mandate exists but hasn’t been implemented. It won’t be implemented between now and 2021 given the coronavirus and the potential of a second wave,” he said.

“To be able to deal with the fallout from the coronavirus crisis requires the powers of an independent nation.”

Pete Wishart, a senior SNP MP, has called for the party to withdraw from the national UK parliament if Johnson continues to refuse a second independence vote in the face of rising support for independence.

“If the UK refuses to participate in an agreed referendum in the face of majority support and a clear democratic mandate, we must presume that they have decided to exempt themselves from their obligations and responsibilities as a partner in the union,” he said, calling for a unilateral Scottish independence vote without London’s permission.

“Beyond that, we should be looking at withdrawing from the apparatus of the UK state and starting to informally acquire the responsibilities currently exercised by the UK,” he said.

“This could start by withdrawing from the inter-governmental infrastructure determining the management of the four nations of the UK. This could be escalated up to and including the participation in institutions of the UK Parliament.”

Overall, the UK voted 52% to 48% in favor of Brexit. England and Wales voted to leave, Scotland and Northern Ireland voted to remain.

The Conservatives are officially known as the Conservative and Unionist Party and like to portray themselves as such. But critics accuse them of increasingly acting as an English nationalist party unconcerned with the other constituent nations of the UK.

Northern Ireland was sacrificed in the UK’s Brexit negotiations with the European Union, and with the Irish unionist Sinn Fein party polling well both in Northern Ireland and the Republic of Ireland, Irish reunification is gaining traction.

Northern Ireland remains politically a part of the UK but economically will stay in key parts of the EU single market. Goods crossing the Irish Sea between Northern Ireland and Great Britain (England, Scotland and Wales) will need custom checks.

Wales, usually quite tranquil by UK standards, has even seen its own bump in support for independence, albeit only peaking at around 27%.

It is increasingly expected that Scotland will become an independent country. What would be truly unexpected, however, would be for Britain – exhausted by Brexit – to simply unravel, and not with a furious bang, but an apathetic whimper.

As the UK’s recent political history shows, however, anything can happen.