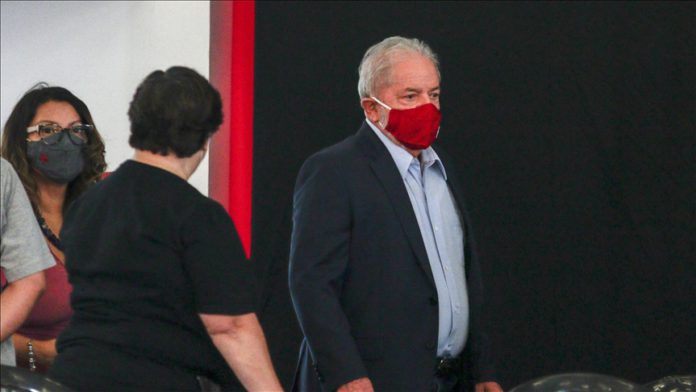 Brazil’s former leader Luiz Inacio Lula da Silva criticized President Jair Bolsonaro on Wednesday over his handling of the coronavirus pandemic in his first public speech since the Supreme Court decided to annul all his convictions.

During a 90-minute speech in his political cradle in the city of Sao Bernardo do Campo in Sao Paolo state, Lula adopted a tone showing he intends to assume the leadership of the opposition to Bolsonaro.

Speaking on the COVID-19 crisis in the country, Lula expressed his solidarity with families that lost loved ones to the disease and to those who are unemployed.

“I’m going to get my vaccine and I want to [declare] to the Brazilian people: Don’t follow any stupid decision by the president or the health minister. Get a vaccine. [Do it] because the vaccine is one of the things that can get you out of COVID. But don’t think you can get the vaccine and already take your shirt off, go to the bar, order a cold beer and talk. No!,” he said.

He also called Bolsonaro a “braggart” and criticized the way the he is leading the country, saying Brazil “has no government.”

Lula also said the people need jobs and not weapons, in a direct reference to Bolsonaro’s measures to ease access to weapons and ammunition.

Monday’s Supreme Court ruling meant Lula is eligible to run again for president. In his speech, however, he said it is too early to think about his own party’s candidacy or that of other left-wing parties in next year’s election.

“We will discuss that well ahead,” he added.

In a reference to Operation Car Wash, a massive corruption probe that led to his condemnation and imprisonment for 580 days, Lula said he was “the victim of the biggest legal lie in 500 years of history.”

He called the Car Wash task force “a gang” and said they were obsessed with condemning him because they wanted to create a political party. According to him, the operation had “disappeared” from his life.

UK coronavirus antibody test found to be a success