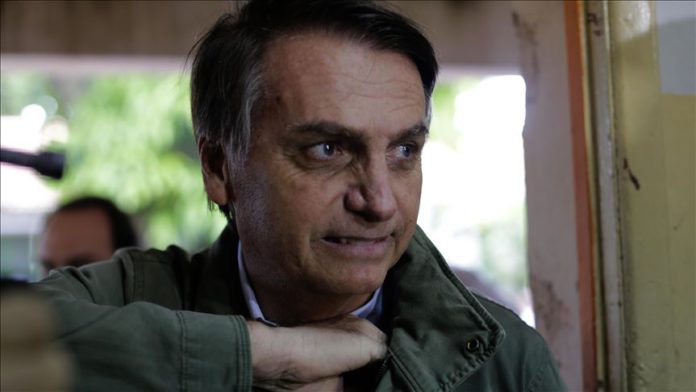 Brazil’s President Jair Bolsonaro threatened to punch a reporter in the face over the weekend after being asked about his family’s links to an alleged corruption case.

“President, why did your wife Michelle receive 89,000 reais (about $16,000) from Fabrício Queiroz?” the reporter asked Bolsonaro.

The president responded by telling the journalist that he “felt like covering your face in punches.”

The alleged corruption scheme involves deposits made between 2011 and 2016 by Queiroz, a former aide of Bolsonaro’s eldest son Senator Flavio Bolsonaro, into a bank account supposedly belonging to first lady Michelle Bolsonaro.

Queiroz is currently being detained as part of an investigation against Flavio, who is accused of appropriating the salaries of employees who worked with him while he was a state representative for Rio de Janeiro between 2003 and 2018.

According to the accusations, Flavio demanded that his advisors give him a portion of their salaries, which is illegal, and Queiroz was responsible for collecting the sums and depositing them in the accounts of the Bolsonaro family.

The president countered by asking about the alleged monthly transfers made by money changer Dario Messer to the Marinho family, owner of the Globo chain and the O Globo newspaper.

On Monday Bolsonaro spoke again on the subject.

“For at least 10 years, Globo has been chasing me, and they have been unable to prove anything against me,” he said on his Twitter account. “Now I’m waiting for explanations from the Marinho family about the “doleiro dos doleiros” (money changer Darío Messer), where values over R$1 billion would have been transferred to them,” he added.

The family denies any wrongdoing.

After a very rocky relationship, the president had seemed to be smoothing out the rough edges with the press in the last few weeks, but the country’s media associations condemned Sunday’s episode.

“It is unfortunate that once again, the president is reacting aggressively and fearlessly to a question from a journalist. This attitude in no way contributes to democracy and to the freedom of the press provided for in the Constitution,” Brazil’s National Association of Journalists said in a statement.

O Globo, one of Brazil’s major news companies, also condemned Bolsonaro’s actions against the journalist in a statement published Sunday hours after the incident.

“GLOBO repudiates President Jair Bolsonaro’s aggression against a newspaper reporter, who was just doing his job in a totally professional manner,” it said.

By Sunday evening, the campaign had gone viral on social media, with some of Brazil’s most famous activists, academics and artists publishing the question about Queiroz that bothered the president.