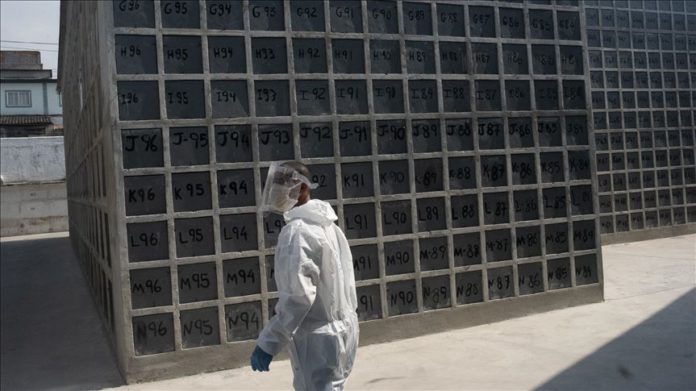 The World Health Organization (WHO) said Tuesday the COVID-19 pandemic is “one big wave,” not a seasonal pandemic.

It warned against complacency in the northern hemisphere during the summer months because the infection does not share the influenza’s tendency to follow seasons.

“It must be flattened so that it only wets the feet,” said Margaret Harris of the WHO.

July, August and September are winter months in the southern hemisphere, which could bring a faster rise in infections.

A coalition of more than 60 unions filed a complaint with the International Criminal Court (ICC) to investigate President Jair Bolsonaro’s government for crimes against humanity for its handling of the pandemic.

The group representing health workers accuse the government of being “criminally negligent in its management of the COVID-19 pandemic and risking the lives of healthcare professionals.”

Bolsonaro has repeatedly downplayed the pandemic, comparing it to a “little flu” and defending the use of chloroquine, a drug that has not been scientifically proven to be effective in combating the virus.

Brazil has the world’s highest number of coronavirus cases and deaths after the US, recording almost 2.5 million infection and more than 88,000 fatalities.

Medellin Mayor Daniel Quintero asked the government to reinforce medical staff in his city with Cuban doctors, a request that has caused controversy with rising cases numbers.

Although the right-wing government has been accused by opposition members of politicizing the health crisis, Colombian President Ivan Duque said the country is prepared to take on the pandemic with its own medical personnel, and assistance with foreign medical personnel had protocols that should only be activated in case of “extreme need.”

“The important thing is to be clear that there is no bias or discrimination here with respect to countries, but there are procedures that have been established,” he said.

More than 2,000 doctors, nurses and medical staff from Cuba have been collaborating in 27 countries affected by the virus.

Interim President Jeanine Anez announced Tuesday she recovered from the virus and would return to work.

“Thank you with all my heart for the love and support during my coronavirus illness,” Anez said in a tweet. “Bolivians are a great family. We will move forward.”

Eight officials, including the health minister, tested positive for the virus in the country that registered 71,181 COVID-19 cases and 2,647 deaths, according to Johns Hopkins University.

Meanwhile, with a cardboard coffin and a dummy representing Anez, unions demanded presidential elections be moved up to September rather than October, defying the Bolivian Supreme Electoral Tribunal’s announcement that polls will be postponed until Oct. 18 in hopes COVID-19 infections are reduced.

Acting Minister of the Presidency Yerko Nunez, said protests failed to comply with quarantine measures such as social distancing and the use of masks.