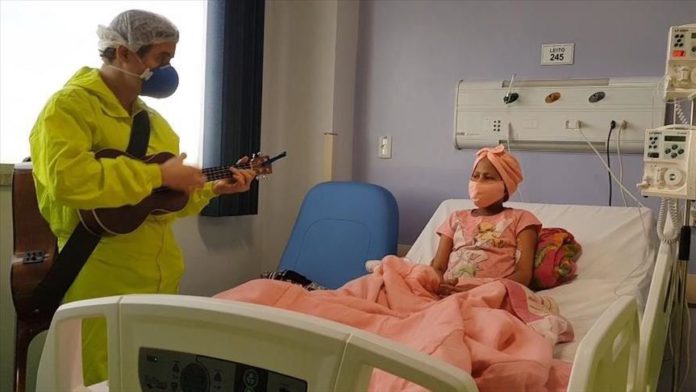 The loneliness of coronavirus patients isolated in hospital rooms is usually a painful feeling than any physical discomfort, according to the accounts of many people who were in that situation.

Seeing that the clinic where he attended till the pandemic suspended its activities, Henrique Rego, a geriatrician who works in Sao Paulo, did not hesitate to pack his bags and travel to help those who needed it most.

It was mid-May and the images coming from Manaus, the capital of the Brazilian state of Amazonas, were terrifying. Those killed by COVID-19 were buried in mass graves in the municipal cemetery, while their relatives cried and showed their helplessness in the distance. Over there went Rego, who in addition to his medical instruments, included a guitar and a ukulele in his suitcase.

From the Eduardo Gomes International Airport in Manaus, he went non-stop to Delphina Aziz, a public hospital that received the highest number of patients in the city, where intensive care beds were beginning to be scarce. But Rego already knew how complicated the picture was. In addition to volunteering to care for patients in the first aid room and infirmary, he came with a mission that he had not been able to accomplish during his 11 years in Sao Paulo.

In addition to his training as a doctor at the National University of Rio Grande do Norte, in Northeast Brazil, where he is from, and his postgraduate degree in Integrative Medicine at the prestigious Albert Einstein Institute in Sao Paulo, Rego took a course with the American Hunter Doherty, known as “Patch” Adams, a doctor of laugh therapy who was the inspiration for a famous movie starring Robin Williams.

“I always had that concern. Beyond my profession as a doctor, I define myself as someone dedicated to caring for people. I can do a medical consultation, using a stethoscope, with my guitar and my music, or simply with a conversation of life, to approach who is suffering,” says the geriatrician.

As he gained confidence among his colleagues and patients at the Aziz Hospital, Rego was encouraged to play his ukulele during lunch breaks. “At first, they were surprised, but then they joined with choirs and clapping. Shortly after, we were authorized to take the music to the pediatric wing, and other colleagues who played different instruments joined the band,” recalls the Potigian doctor, as those born in the state of Rio Grande do Norte are called.

As a “caregiver” – the way he likes to be called – Rego knows that the prohibition that coronavirus patients have from receiving visits or having companions in the room makes them feel very lonely and the fear of dying under those conditions leads them to despair. Music, then, appears as a mechanism of body_abstraction. “It may seem insignificant for those who are not in this condition, but for patients with the virus, a song can be an extraordinary motivation,” says the doctor.

“Over time, I learned to communicate with my eyes: I could see them smile, even if we were all with face masks,” he adds.

Shortly after his arrival, Rego was the great animator of the “corridors of victory”, that brief and happy ceremony in which patients leave the hospital after being discharged with a sign that says: “I beat COVID-19”, wrapped in applause from the establishment’s employees.

The doctor’s repertoire is wide, as he seeks to satisfy all kinds of requests, according to the taste of his colleagues and patients, all with different ages. “I play Brazilian classics such as Almir Sater, Raul Seixas, Roberto Carlos, and Legiao Urbana, passing through the Sertanejo, religious songs, and some international singers that I like,” explains Rego.

The state of Amazonas was one of the most punished in Brazil, and to date has counted 97,079 confirmed infections and 3,224 deaths. “The health staff was never so tense, so it was a great pleasure for me to see how everyone celebrated when I grabbed my ukulele and started playing,” says the doctor.

However, it was not all smiles and songs in volunteering. The worst moments were experienced when having to report the death of the patients to their relatives, who had not been able to accompany their loved ones in those last moments.

Rego also remembers the families who spent hours in the streets surrounding the hospital waiting for a greeting, behind the window glass, from their interned relatives. “There was even a 16-year-old patient who had never slept alone outside home. The parents slept every day by her window to make her feel accompanied. It was an exciting thing,” he says.

The doctor, teacher, and musician left the Delphina Aziz, in Manaus, about two months ago, when the situation in the city began to calm down. Back in Sao Paulo, he says he is happy knowing that the musical project continued in the Amazon hospital with his colleagues.

“When I arrived in Sao Paulo, more than a decade ago, I was scared, I thought that I could be considered less medical if I told them that I was also a clown, singer, guitarist and that I like to talk about love,” he explains. Over time, Rego discovered that not only would he not be belittled for it, but being multitasking would open several doors for him.

At the Albert Einstein Hospital in the Sao Paulo capital, while studying Integrative Medicine, he learned about different forms of care and the use of music to control the agitation of the elderly with Alzheimer’s. When he finished, he began to teach on the subject at the same institution.

“Whenever possible, I will take my music and try to take care of people better and better, give back a little what the world gave me”, synthesizes the Brazilian Patch Adams, who confesses to having plans to create a musical action similar to that of Delphina Aziz, in Manaus, in the Sao Paulo clinics where he attends.

US urges Taliban to take peace talks as seriously as military...