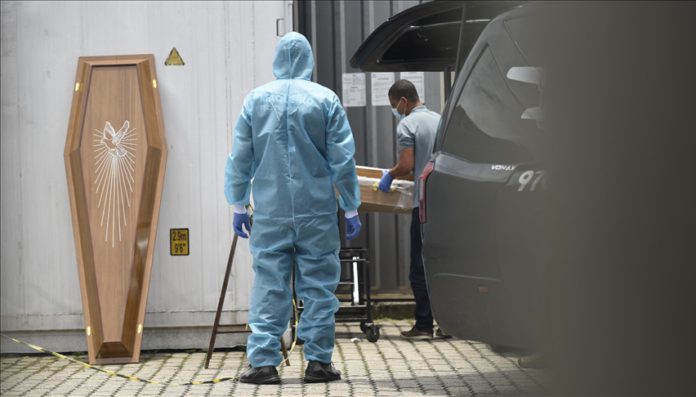 Brazil surpassed 261,000 coronavirus deaths Thursday in what is being regarded by experts as the worst period since the beginning of the country’s health crisis, with some saying the South American nation could face more than 3,000 deaths daily in the next few weeks.

The development comes only a week after the country recorded 250,000 deaths from COVID-19 and less than a month after registering its 10 millionth case.

Brazil reported 1,786 new deaths in the last 24 hours, the second highest daily death toll during the pandemic after Wednesday’s 1,840.

Brazil also surpassed the US in the average of new daily deaths per million inhabitants. With the record 1,840 new deaths Wednesday, Brazil had 6.3 new deaths for every 1 million people. In the US, there were 2,468 new deaths Thursday, or 5.5 deaths per million. Data consider the moving average. While the US has a downward trend in numbers, the opposite is observed in Brazil.

President Jair Bolsonaro attacked a recommendation by the World Health Organization (WHO) to use social isolation as a main resource for stopping the spread of the virus, saying people should ‘stop whining.’

“We have to face our problems […] How long are we going to be crying for? Obviously [we should] respect the elderly, those who have diseases. But where will Brazil end up if we stop?” Bolsonaro said, calling local authorities’ orders to impose restrictions “whining.”

“Essential activities are all those necessary for someone to take bread home.”

Governors and mayors all across Brazil have decided on different levels of restrictions.

In Sao Paulo, Brazil’s biggest economy, Governor Joao Doria announced a two-week lockdown starting next Saturday, only authorizing the operation of health facilities, transportation, the press and establishments such as markets and pharmacies in addition to schools and religious activities. Parks, gyms, bars, museums and cinemas must all remain closed.

Fourteen governors have sent Bolsonaro a letter asking the federal government to adopt measures and seek help from international organizations in order to purchase more vaccine doses. They said in the letter that they are “on the edge” and defended mass vaccination as “the alternative that seems to be the most recommended, and probably the only one capable of stopping the pandemic.”

Roughly 7.7 million Brazilians, or around 3.6% of the country’s population, have received the first dose of the vaccine and less than 1.2% both doses required for full immunization.

“There are idiots on social media, in the press, [saying] ‘go buy a vaccine.’ Only if it is at your mother’s house”, Bolsonaro said. “There is no [vaccine] to sell in the world.”

He said around 40 million vaccine doses are scheduled to arrive in April.

A recent Ipec poll showed for the first time since the beginning of Bolsonaro’s term a drop in his popularity to less than 30%, with only 28% rating him as “good.” According to the survey, which was conducted before the health crisis worsened, 39% rated him as “bad” or “very bad.”

Ever Given ship sails to leave Egypt after more than 100...