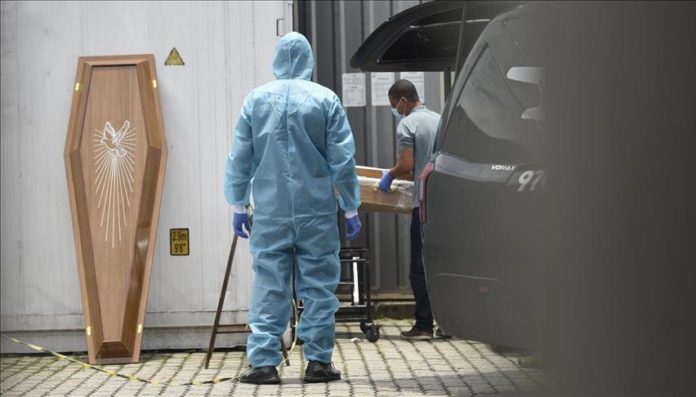 Brazil recorded its 300,000th COVID-19 fatality on Wednesday, only 75 days after registering 200,000 deaths, according to local media.

The somber milestone was reached just a day after the country’s daily death toll from the virus passed 3,000 for the first time and while conditions are showing little sign of improvement.

Fewer than 2% of Brazil’s 5,570 cities have a population of less than 300,000, which means that if all of the country’s COVID-19 victims lived in the same city, many municipalities would be decimated.

The situation in Brazil shows that unlike most countries, where COVID numbers are already decreasing, the pandemic is far from over here.

From March 2020, when the first coronavirus fatality was reported in Brazil, until Wednesday afternoon, the country had registered 300,015 deaths.

The number is expected to grow by the end of the day, as most states have yet to release their full data, with only 10 of the 27 federation units having done so.

By far, Brazil leads in the number of daily deaths in proportion to its population.

The grim figure was reached as the country is witnessing a total collapse of its health system, with the number of cases and deaths increasing in all regions amid a slow and disorganized vaccination program in which only around 3% of the population has taken the two doses necessary for complete immunization.

This all adds up to a reigning negationism and to the recent nomination of Brazil’s fourth health minister since the start of the pandemic. Cardiologist Marcelo Queiroga took office on Tuesday in a closed ceremony not registered in the official agenda.

Twenty-two-year-old Renan Ribeiro Cardoso from Sao Paulo is one of the country’s many victims, succumbing to the virus on March 13.

His biggest dream was to witness the marriage of his parents, who have been living together for 26 years. He had already planned the party and paid for all the ceremony arrangements, but it had to be postponed due to the pandemic.

The family could hardly imagine that the much anticipated date would be the same day that Renan would die. With COVID-19, Renan became the first victim of the lack of ICU beds in Sao Paulo city.

Within a period of only 12 days, lawyer Israel Vieira from Santo Andre, a city in the Sao Paulo metro region, saw his father and two paternal grandparents die from COVID-19.

“I think that if we were a serious country, at least my grandparents would have already been vaccinated,” he told Anadolu Agency, noting they were 80 and 76.

“If Brazil were truly committed to vaccination and not to drugs with no efficacy, even my father could have already been vaccinated,” he added.

A survey released on March 17 this year by the Datafolha Institute shows that 43% of Brazil’s population considers far-right President Jair Bolsonaro directly responsible for the situation the country is in and for the accumulated deaths.

Local administrations such as governors (17%) and mayors (9%) appear next. A portion (6%) blames the population itself, which has failed to follow social distancing guidelines.

Since the end of 2020, inspections in many cities have found illegal crowded parties and bars and nightclubs open. Public transport, which is precarious in large cities, is also a major driver of crowding.

For 5%, the blame falls on all those mentioned — both national and local governments and the population.

Although 55% of Brazilians say they are “very afraid” of the coronavirus, the percentage of the population that thinks that isolation should be maintained has never been lower, at 59%.

At the beginning of the pandemic, it was 76%. One-third argue that isolation measures should end, in keeping with Bolsonaro’s recurring negationist speeches.

“When there is denial about the increase in the number of cases, when [people] deny that it is necessary to take measures other than just vaccination, what we see is the chaos in which we are living”, says sanitarist and epidemiologist Carla Domingues.

In health units, professionals report more children, youths and adults under the age of 60 in wards and ICUs. They take longer to seek care. Therefore, they arrive in a serious state of health.

As they put up more resistance to the virus compared to older people, however, they occupy beds for a longer time, contributing to overcrowding in hospitals.

According to the state-run Oswaldo Cruz Foundation (Fiocruz), the largest medical research center in Latin America, the situation of ICU bed occupancy in Brazil is “extremely critical.” All of Brazil’s states with the exception of Amazonas and Roraima are classified as “critical alert.”

There is yet another serious problem threatening patients in Brazil: the lack of oxygen. According to the Attorney General’s Office, six states are in a critical situation, including Mato Grosso, Ceara and Acre. Another seven are in the alert stage, including Sao Paulo, Para, Minas Gerais and Bahia.

Health organizations also warn of a potential shortage crisis for the medicines used for intubation, with low stocks and a price hike that reaches 1,700% in some cases.

In the midst of all this, for the sixth time, the federal government has reduced its forecast for vaccine doses to be made available to the population, causing uncertainty.​​​​​​​

Although governors and mayors have announced tougher restrictive measures in recent weeks, there is still a lack of national direction to change the situation as a whole.

Egypt’s role in Syria group is work for peace: Turkey

Tropical Storm Claudette blamed for 10 deaths in accident in Alabama