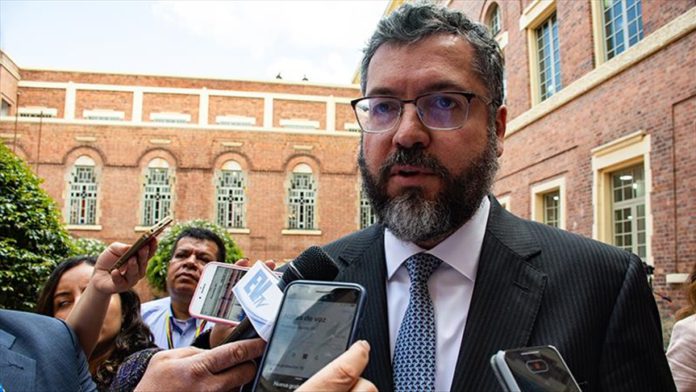 Facing a loss of support, Brazil’s foreign minister has stepped down, according to local media reports.

On Monday morning Ernesto Araujo reportedly handed in his resignation in person to President Jair Bolsonaro, saying he does not want to be a drag on the government.

Though his departure has not been officially announced, Araujo has been under growing pressure from Brazil’s Congress and had lost allies.

Last weekend, Araujo accused Senator Katia Abreu of lobbying for China, which increased the pressure for him to leave.

Abreu, who heads the Senate Foreign Relations Commission, said she just argued for no discrimination against China in a 5G auction set for later this year. Criticizing Araujo, she got support from congressmen who were already demanding his resignation.

Since taking office at the beginning of the Bolsonaro administration in 2019, Araujo has taken a critical stance towards countries like China and India.

His support last year for the re-election of then-US President Donald Trump also drew fire. Brazil was one of the last countries to recognize the victory of current President Joe Biden. Araujo also failed to criticize the January storming of the US Capitol by Trump supporters, which resulted in the deaths of at least five people.

Last October, Araujo said about Brazilian diplomacy, if it “makes us an international pariah, then let us be that pariah.”

Araujo said he would prefer to see Brazil’s foreign policy being condemned by other nations than to be allies with what he called “the selfish cynicism of the globalists, the corrupt and the semi-corrupt.”

In recent days congressional leaders, generals who advise Bolsonaro, important businessmen and agribusiness leaders have all joined together to push for Araujo’s departure.