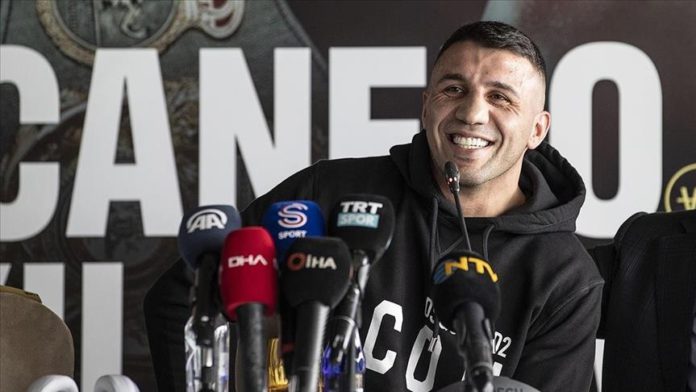 Turkish boxer Avni Yildirim has focused on a big fight in late February in the US against a famous opponent, Saul ‘Canelo’ Alvarez, for the super middleweight title.

The 30-year-old had one loss and two draws in his career.

Yildirim, 29, targets to beat Alvarez to earn the super middleweight title.
The fight will be held at Hard Rock Stadium in Miami, Florida, on Feb. 27.

Speaking in a press conference ahead of the fight, Yildirim on Thursday emphasized the importance of this fight, saying that it will be his chance to take place in the world’s biggest boxing match for his country [Turkey].

“Since my last game, I have faced some difficulties. The pandemic affected me, but we were patient and worked. I continued my training in the USA and Germany for 21 months out of my country. I did not give up. We have provided all the opportunities to win this fight, “ he said.

“I trust my trainer Joel Diaz. It is a great honor to represent my country on such a big platform. Nobody gives a chance to the Turkish boxer. I hope we will do our best to bring the belt to our country.“

The 29-year-old said he had started his career by watching the fights of a Turkish boxing icon, Sinan Samil Sam, in 2004 and adding that he sees Samil as his idol.

“He is legendary for us. I hope it will be possible to take the belt to the grave of Sam.“

Called “Bull of the Bosphorus,” Sam died of liver failure in 2015. He was a 1999 world amateur champion in the super heavyweight category.