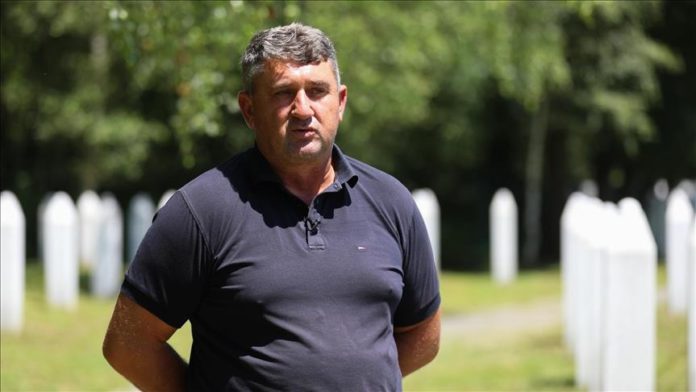 Srebrenica genocide survivor Enver Secic says he will never forget the fear and anxiety he experienced during that period.

Secic, who managed to survive by taking the route used by those fleeing the genocide through the forest road to reach the “safe zone” city of Tuzla during the war in Bosnia and Herzegovina, described his situation then to Anadolu Agency.

Trying to hold on to life as a 21-year-old on the route called “death road” due to the massacres committed by Serb forces in July 1995, he remembers his experiences like it was yesterday, despite the passing of 26 years.

Secic said he experienced the most painful moment of his life while they were advancing at midnight.

“They said that my father-in-law was injured and my brother-in-law died. I came back. There were thousands of dead. I thought everything was over. After that, I didn’t feel anything.”

He added that he will continue to tell of the fear and anxiety he experienced, underlining that the torture and deaths of innocent people in Srebrenica in 1995 should never be forgotten.

The UN Security Council declared Srebrenica a “safe area” in the spring of 1993. However, Serb troops led by Gen. Ratko Mladic, who was later found guilty of war crimes, crimes against humanity and genocide, overran the UN zone.

About 15,000 Srebrenicans fled to the surrounding mountains, but Serb troops hunted down and killed 6,000 more people.

Spain sees 619 more virus deaths as some plan return to...