TurkishPress
Home News Bosnian victim, 16, to be laid to rest 26 years after genocide 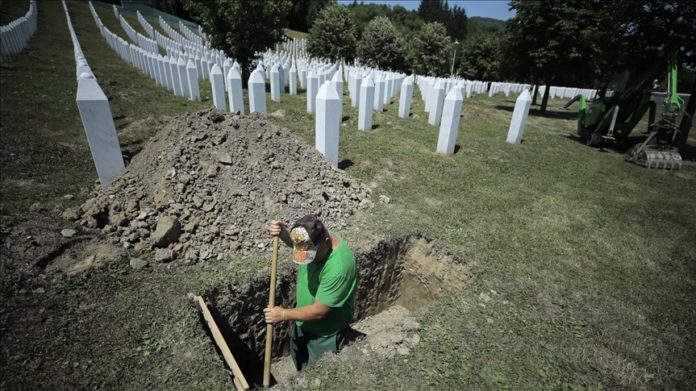 Bosnia and Herzegovina will bid farewell to a 16-year-old Srebrenica genocide victim on July 11.

Azmir Osmanovic will be the youngest victim buried Sunday on the 26th anniversary of the Srebrenica genocide.

Eighteen other victims will be buried at commemoration ceremonies.

Azmir’s older brother, Azir Osmanovic, told Anadolu Agency about the last memories he had with his brother.

He said they were exiled to Srebrenica from their village in 1993, shortly after the war started.

“After Srebrenica came under the control of Serbian forces, on July 11, 1995, my brother, Azmir, together with my father, Aziz, tried to reach the ‘safe zone’ in the city of Tuzla through the forest path,” said Osmanovic. “I said goodbye to my brother near a gas station in Srebrenica.”

Osmanovic said it was the last time he saw his brother.

“He shared biscuits with our cousin and threw them in their backpacks. Azmir insisted my father take off. This was our last meeting,” he said.

In 2003, Osmanovic got information that Azmir was killed by Serb forces during his trip on the path to the safe zone.

It took another 15 years to reach Azmir’s remains, which were only skull bones.

“The Identification Center contacted me and said that they found skull bones which belonged to my brother,” said Osmanovic. “Believe me, I was as upset as I lost my brother that day. The bone remains were found in August 2018. A few bones remain belonging to the skull. I decided to bury these remains because I don’t think I will find the rest of the body. At least have a grave where I can pray.”.

Azmir was separated from his father on the first trap, or minefield, on the forest path, said Osmanovic, who believes his brother most probably wandered around the forest with his friends. They lost their way and stepped on a minefield.

He said he has worked at the Potocari Memorial Center for more than 12 years where he tells visitors about the genocide every day.

“I try to do my best so that more people can hear what we went through in July 1995,” said Osmanovic.

The UN Security Council declared Srebrenica a “safe area” in the spring of 1993. However, Serb troops led by Gen. Ratko Mladic overran the UN zone.

About 15,000 Srebrenicans fled to the surrounding mountains, but Serb troops hunted down and killed 6,000.

In 2007, the International Court of Justice in The Hague ruled that a genocide was committed in Srebrenica.

On June 8, 2021, UN tribunal judges upheld in a second-instance trial, a verdict sentencing Mladic to life for genocide, persecution, crimes against humanity, extermination, and other war crimes in Bosnia and Herzegovina.