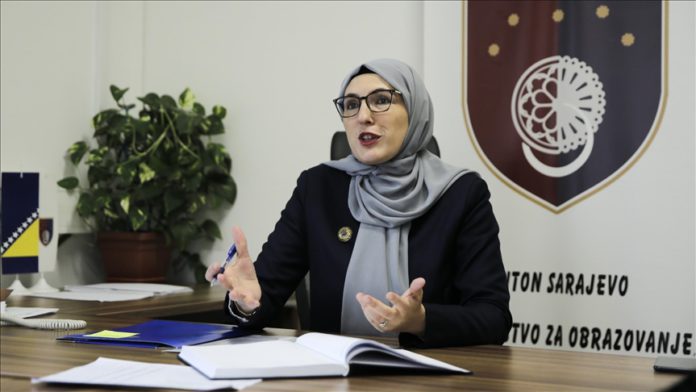 Bosnia and Herzegovina’s first headscarf-wearing minister said Wednesday that women should be more involved in government.

“There are four women in the current cantonal government, and this is a record. There should be more women in the administrations. We, as a society, are still on the way in encouraging more women to participate in decision-making and policy-making processes,” said Sarajevo Canton Education Minister Naida Hota Muminovic.

Muminovic added that women should also be confident in themselves and not stay in the background.

“If women stand on the sidelines or become the voice of the minority, I worry that women’s participation in politics will not be felt,” said Muminovic, who was in education throughout her life.

“Education is the most important phenomenon for both the student and society. I believe that the problems in education stem from the lack of quality leadership,” she added.

Speaking about the effects of the novel coronavirus pandemic on education, Muminovic said the pandemic may lose its effect in countries where vaccination studies started, but Bosnia and Herzegovina is not in that stage yet.

“As online lessons encourage information, teachers also developed new methods in this process. Other heroes of the pandemic were teachers and students,” she said.

She underlined that while nothing can replace face-to-face lectures, online education is the only step to be taken in order not to interrupt education during the pandemic.

Muminovic is an English teacher and principal of the First Bosnian High School, one of the best schools in the country.

She was born in 1981 in the capital Sarajevo where she went to primary school but had to migrate to Austria due to the Bosnian War.

Returning to Sarajevo in 1996 after the war, Muminovic graduated from the First Bosnian High School with honors.

Muminovic studied English Language and Literature and Law simultaneously at the University of Sarajevo and worked as an English teacher after graduating from university.

She is married and has two children.