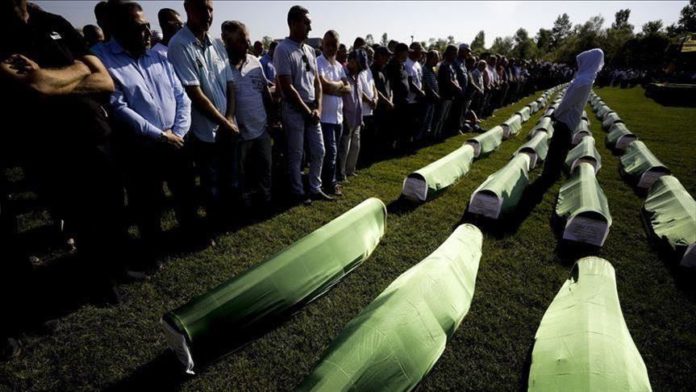 Bosnia and Herzegovina on Monday released a report on denial of the 1995 Srebrenica genocide, in which over 8,300 Muslims were killed by Serbian forces.

The report, written by historian Monica Hanson Green, includes many details about the war in Bosnia in 1992-1995, subsequent war crimes trials, and the media outlets and people who deny the genocide.

Emir Suljagic, head of the Srebrenica Memorial Center, which published the report, said that the problem of genocide denial is very important.

“We took a new responsibility to raise awareness of the genocide. This report is the first step in this,” said Suljagic.

He emphasized that all the data in the report is real and that the report in no way targets the Serbian people.

“The report mentions people and institutions that deny and defend genocide. The Srebrenica genocide is only part of the three-and-a-half-year systematic persecution of the Bosniak people and Bosnia and Herzegovina,” said Suljagic.

This is the first time such a study was done in Bosnia and Herzegovina, and the report will be sent to the international institutions, said the center.

In the spring of 1993, the UN Security Council declared Srebrenica a “safe area.” However, Serbian troops led by Gen. Ratko Mladic – later found guilty of war crimes, crimes against humanity, and genocide ­– overran the UN zone.