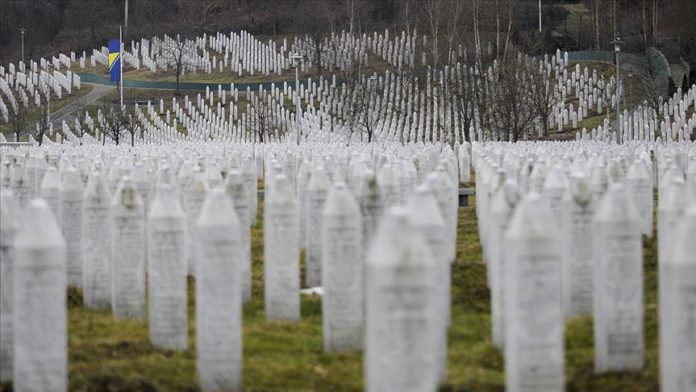 Bosnia and Herzegovina on Thursday bid farewell to nine newly identified victims of the 1995 Srebrenica genocide.

The remains of the genocide victims were placed on minivans laden with flowers in the Bosnian city of Visoko on Thursday morning for their final journey to rest in a cemetery.

The victims will be buried in the village of Potocari, northwest of Srebrenica, on Thursday to mark the genocide’s 25th anniversary.

A truck carrying the victims’ remains arrived at the Presidential Council Building in the capital Sarajevo. Bosnian officials and members of the public prayed for the victims and placed flowers on the truck.

Sefik Dzaferovic, the Bosniak member of the Presidency of Bosnia, again stressed that legislation outlawing genocide denial is needed in Bosnia and Herzegovina, and the international community should press on this point.

Dzaferovic said that some politicians in Bosnia and other countries of the region still do not respect the victims,

“They glorify war criminals, those who committed this genocide. They should end this now,” said Dzaferovic.

As the truck passed through the streets of the capital Sarajevo, thousands of people, including women and children, could be seen crying. Many showered the truck with flowers and raised their hands in prayer.

Salko İbisevic, only 23 when he was killed, will be the youngest victim to be buried this year. Hasan Pezic, the oldest, was 70, and will be laid to rest in this year’s ceremony.

Every year on July 11, newly identified victims of the genocide – which claimed the lives of over 8,000 people – are buried in a memorial cemetery in Potocari, eastern Bosnia. Thousands of visitors from various countries attend funeral services and burials.

As of this year’s funeral, the number of burials in the cemetery will rise to 6,652.

The UN Security Council had declared Srebrenica a “safe area” in the spring of 1993. However, Serb troops led by Gen. Ratko Mladic – later found guilty of war crimes, crimes against humanity, and genocide – overran the UN zone.