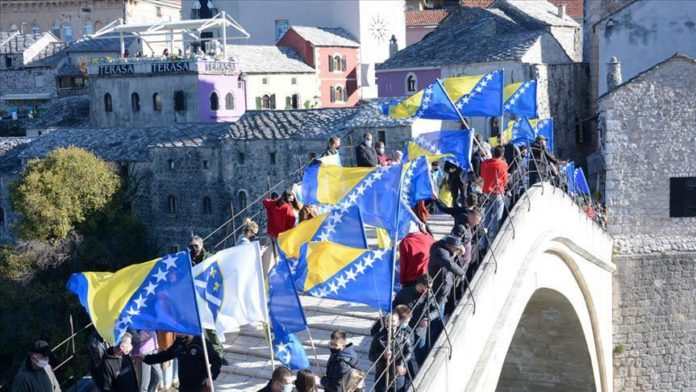 Bosnia and Herzegovina on Monday commemorated the 27th anniversary of the demolition of Mostar Bridge, one of the most important Ottoman monuments in the Western Balkans.

A memorial ceremony on the historic bridge began with sirens ringing at exactly 10:16 a.m., the time when the bridge was destroyed 27 years ago.

Those taking part in the ceremony threw carnations and lilies into the Neretva River at that moment while water jumpers symbolically made “silent jumps” or jumps without applause from the bridge.

Ramiz Tiro, a resident of Mostar, said he received the news that the bridge had been destroyed in the camp where he was being held captive during the war.

“It was the most difficult moment of my life because we were a generation that grew up with this bridge,” said Tiro.

Mostar Bridge, destroyed by Croat forces during the 1992-1995 war in Bosnia and Herzegovina and rebuilt after the war, continues its mission to unite people from different races.

Unable to withstand the artillery shots launched by Croat forces on Nov. 8, 1993, the bridge collapsed into the waters of the Neretva River on Nov. 9, 1993.

The bridge unites not only the two sides of the city but also the Bosniak and Croat people, who still live together.

The bridge, which connects the Bosniak and Croatian neighborhoods of the city, has also been used as a jumping platform by brave young people for centuries.

Many countries did not remain silent over the collapse of the bridge. With the support of Turkey, it was rebuilt in accordance with the design of the original bridge in 2004.

Mostar Bridge was added to UNESCO’s World Heritage List in 2005 along with the old town of Mostar.

*Written by Talha Ozturk from Belgrade