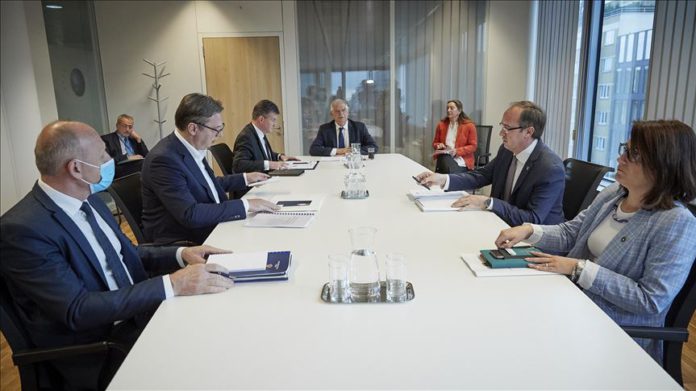 Resolving the issue of Kosovo must be connected with the future status of Republika Srpska (RS), the Serb Member of the Presidency of Bosnia and Herzegovina said Thursday.

Milorad Dodik’s remarks came after meeting Serbian President Aleksandar Vucic in northern Banja Luka – the de facto capital of the RS entity which is one of two entities of Bosnia and Herzegovina.

“We believe that Serbia has a natural and state right to Kosovo, as well as that the number one state issue for Serbia is the issue of Kosovo. We believe that the first national issue of Serbia should be Republika Srpska,” said Dodik.

“We believe that Kosovo cannot be an internationally recognized state in the way some countries in the world accept it. The RS should have the right to be treated in the same way because the circumstances in the way this issue is being discussed are nearly identical,” he said.

It is impossible to discuss the special status of Kosovo without discussing the status of RS in parallel, he said, but “took the subject seriously, but did not answer anything.”

“We will try to convince him to view these issues jointly,” Dodik said, adding that the issue could also be discussed in the RS National Assembly and such an approach is not against the Dayton Agreement.

Meanwhile, he said RS will not allow Bosnia and Herzegovina to recognize Kosovo’s independence.

“We do not want to inflict any harm on anyone, but we are also ready and determined to defend our interests and that RS and Serbia, without hesitation and without any prohibitions, can clearly express their interests,” Dodik said.

In the last 25 years, RS has not received anything from Bosnia, except demands for its autonomy, he said.

“That must stop, and we want to protect our interests in the best possible way,” he pointed out, adding that he hoped RS and Serbia would one day be one state.

Vucic said his country will stick to the Bosnia’s peace agreement in 1995 in which RS is part of Bosnia and Herzegovina.

Kosovo declared its independence from Serbia in 2008, with most UN member states recognizing it as a separate autonomous country from its neighbor.

Belgrade, however, maintains it is a breakaway province and has worked to roll back recognition.