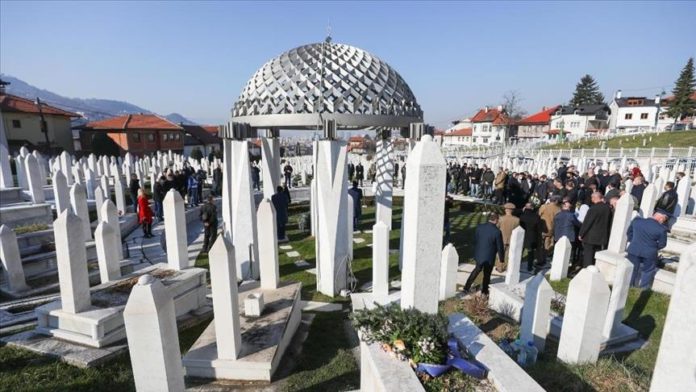 Bosnia Herzegovina on Monday marked the 29th anniversary of its independence.

Bosnia and Herzegovina became independent from the former Yugoslavia when an independence referendum was held on Feb. 29 and March 1, 1992.

Most Serbs boycotted the referendum while 64% of the population voted for independence.

The results of the referendum were announced on March 6, 1992, and Bosnia and Herzegovina was admitted to the UN on May 22, 1992.

Bosnia and Herzegovina became an independent state, but had to suffer a bloody battle for independence and the loss of hundreds of thousands of lives.

In the country, where Bosniak Muslims make up more than half of the population, the traces of the bloody war in 1992-1995 are still not completely erased. The complex political structure of the Dayton Peace Agreement, which ended the war, does not allow the country to fully stabilize.

Bosnia and Herzegovina’s main objective is to become a member of the European Union. The country made an official application to the EU in 2016 for membership, but has not yet been granted the status of a “candidate country” for the last five years.

Unable to fulfill many EU demands due to its complex structure, Bosnia and Herzegovina has been waiting for a long time in front of the EU gate. While the bloc puts forward many decisions of the European Court of Human Rights against Bosnia and Herzegovina as preconditions, the Bosnian authorities, unable to reconcile themselves and change discriminatory laws, keep struggling.

NATO membership, another strategic target of Bosnia and Herzegovina, has been impeded by the opposition of Serbs in the country.

It is facing other significant issues such as unemployment, migration of its young population to Western countries, and the rising number of immigrants in recent years along with the novel coronavirus pandemic that has affected the whole world since its emergence in December 2019.

The country’s economy was also badly damaged due to strict measures taken during the first wave of COVID-19.

The health system is also going through a hard time due to the pandemic.

Bosnia and Herzegovina, with its strategic location in the middle of Europe, rich natural resources, significant investment potential, and cheap labor force, is often the victim of cumbersome bureaucracy due to its complex structure.