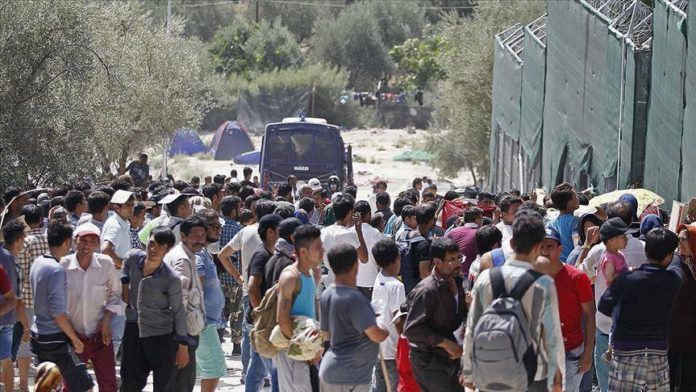 The International Organization for Migration on Tuesday said it is stepping up its assistance to thousands of migrants caught in a bottleneck in Bosnia and Herzegovina as they try to reach the EU.

The Balkan country has become a bottleneck as people try to reach the European Union, said IOM officials, who noted a tussle is going on between central government officials and local officials over the housing of migrants.

“Over the past two weeks, we’ve watched with growing concern the dire humanitarian situation facing many migrants in Bosnia-Herzegovina,” Paul Dillon, IOM spokesman in Geneva, said at a UN press briefing.

“The 1,400 men living in the camp joined an estimated 1,500 others including women and children, sleeping rough on the border with Croatia,” said Dillon.

The humanitarian emergency was caused by the closure of the camp. Minutes after the closure, a fire destroyed it, said the IOM.

“This camp was built earlier this year in response to over-crowding and unsuitable conditions elsewhere,” said Peter Van der Auweraert, IOM chief of mission in Bosnia and Herzegovina, at a virtual press briefing.

“Bosnia Herzegovina has received about 70,000 migrants since early 2018.

“Most of those migrants use Bosnia-Herzegovina as a transit route to go from mostly Greece, towards Croatia and Slovenia, into Italy,” he said.

“The problem has been that most of the political response has been somewhat haphazard. And we’ve had each winter crisis whereby a number of people find themselves sleeping rough,” Van der Auweraert noted.

Some 30% of people are Pakistani nationals, while the second group is from Bangladesh, followed by Afghans, people from North Africa, specifically Algeria, Morocco, and Iraq.

“This is a nightmare scenario: these people should be inside in warm conditions, just as the rest of Europe is doing at this holiday time,” said the IOM official.

Van der Auweraert said that local people may not want a country “where you have this mixed migration and asylum seekers, and refugee flows coming through.”

“But…there is a consensus, I believe, amongst a majority of people that while they are here, they should be treated humanely.”

He said that migrant in Lipa are getting angry “because they know that it is an issue of political decision making, why they’re in the situation that they’re in, they’re frustrated.”