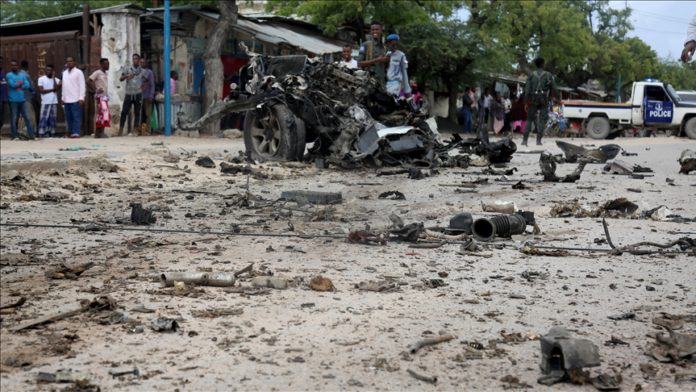 At least four people were killed and nine others wounded when a car bomb blast targeted a police convoy in the Somali capital Mogadishu on Saturday, officials said.

He added that Qarole was not hurt in the attack. Banaadir is an administrative region where the capital is located.

The terrorist group’s target was to kill the commander but he escaped unhurt from the attack, he added.

A police officer told Anadolu Agency over the phone that soldiers were among the deadly car bomb blast casualties.

Somali government condemned the attack and expressed “shock and grief” over the loss of civilian lives caused by the attack.

“The Government of #Somalia strongly condemns the terrorist suicide attack & assassination attempt in #Mogadishu on Saturday. It expressed shock and grief over the loss of civilian lives.

“Five people lost their lives in the cowardly attack & 9 others were injured in the attack,” Mohamed Ibrahim Moalimuu, the Somali government spokesman said in a tweet.

Faadumo Hussein, an eyewitness, told Anadolu Agency over the phone that the explosion was powerful and caused damage in nearby offices and buildings.

Al-Qaeda affiliated terrorist group al-Shabaab claimed responsibility for the attack and said it had killed four soldiers and wounded five others.