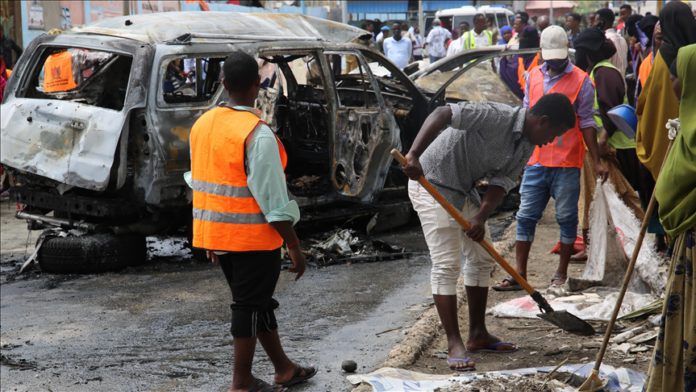 At least six people were killed and more than 10 others wounded in Somalia when a bombing targeted a teashop on Monday afternoon in the Middle Shabelle region, officials said.

The attack took place in the town of Qalimow, located 65 kilometers (40 miles) north of the country’s capital Mogadishu.

A police officer in the nearby town of Balad told Anadolu Agency that the blast was the result of remotely controlled explosives planted in the teashop, with the woman who owned the venue, a waiter, and four soldiers were among those killed in the attack claimed by the al-Shabaab terror group.

“The region is full of explosives planted by the terrorist group al-Shabaab and most people in the area can’t tell the security forces if they see one, because of fear of al-Shabaab,” the officer told Anadolu Agency.

The al-Qaeda-affiliated group claimed that it had targeted the teashop for being a meeting point of Somali government soldiers.

Al-Shabaab has been fighting Somali troops and African Union peacekeepers since 2007.

The group was also behind a 2017 truck bombing in Mogadishu that took 600 lives — the worst terror attack in the country’s history.