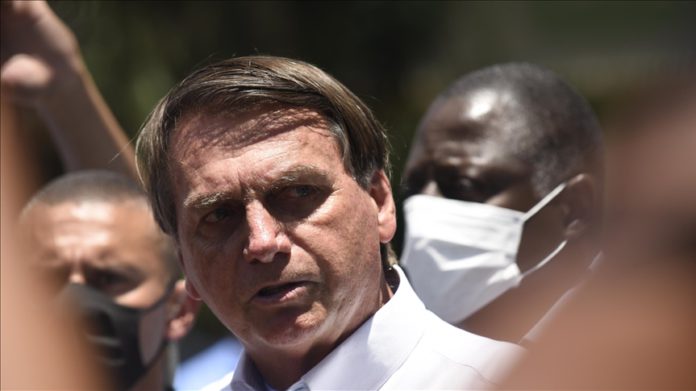 Brazil’s far-right President Jair Bolsonaro told supporters in the city of Ponta Pora on Wednesday that a Senate commission investigating his conduct during the coronavirus pandemic “can’t touch him,” calling some of its members “criminals.”

“They can’t touch us. They won’t get us out of [office] with lies or with a CPI [Senate investigative committee], which is made up of seven criminals”, Bolsonaro said.

“We have a mission ahead of us: to lead the destiny of our nation and ensure the well-being and progress of our people.”

In remarks praising the military, he said “I only feel peace and tranquility because I know that, in addition to the people, I have the Armed Forces committed to democracy and our freedom.”

Bolsonaro’s remarks came on the same day that opposition lawmakers filed an impeachment request against him in the lower house of Congress. More than 120 similar requests have already been filed. Previous requests were shelved by lower house Speaker Arthur Lira, who refused to put them to a vote.

The latest initiative, with the signatures of former Bolsonaro allies, is being called a “super request” in the country as it lists 21 acts by Bolsonaro considered crimes of responsibility. In addition to representatives from the left, the center and the right, the document has also been signed by civil society entities.

Among the acts listed are fomenting conflict with other nations, xenophobic remarks, threats to Congress and the Supreme Court, undue interference with the Federal Police and the Armed Forces, participation in anti-democratic acts and in pro-military intervention protests, threats against an official representative, omissions and errors in combating the coronavirus pandemic, attacks on the electoral process, and failure to create a plan to protect indigenous peoples amid the pandemic.

Pressure for Bolsonaro’s removal from office has increased in recent days, since the revelation of allegations of corruption in the purchase of vaccines. The progress of the committee’s work in the Senate has also made Bolsonaro more vulnerable.