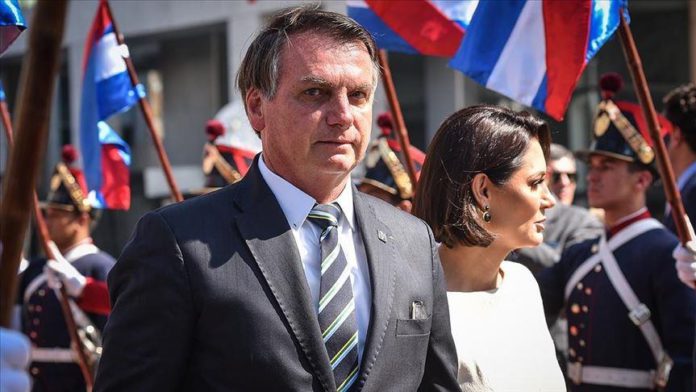 Speaking to supporters in front of the official residence in Brasilia, Bolsonaro said people in the country do not want Lula as a candidate. With Justice Edson Fachin’s decision, Lula regained his political rights and can for now run for the presidency in next year’s election.

“I believe the Brazilian people do not even want a candidate like that [Lula] in 2022, much less [his] possible election,” said Bolsonaro.

According to the far-right president, “Fachin has always had a strong connection” with Lula’s Workers’ Party (PT).

Bolsonaro said he was “not surprised” by the decision.

“It is obviously a one-man decision. It will have to go through the group [judged by other Supreme Court justices], I don’t know, or the plenary, so that it has the necessary effectiveness,” he added.

“Thefts, diversions from Petrobras were huge, around 2 billion reais, that [those who signed plea bargaining agreements] paid back. So it was a really catastrophic PT administration,” Bolsonaro told supporters, referring to the “Car Wash” scandal which involved billions of dollars of bribes paid to politicians through inflated construction contracts and a subsequent corruption investigation.

“We all suffer from a decision like that,” he added, referring to a 3.98% fall in the Brazilian stock exchange and a 1.67% rise in the dollar as a consequence of Fachin’s decision.

News about the Supreme Court’s decision had political repercussions throughout the afternoon. Bolsonaro’s supporters reacted with indignation and frustration, accusing PT and the Supreme Court and praising Operation Car Wash, in which Lula has been condemned. A strong Bolsonaro ally, Brazilian Labour Party (PTB) national president Roberto Jefferson, called Fachin’s decision “insanity, a coup and an abuse of authority.” He lamented what he said was “in a single stroke, [the] end of all Car Wash’s work.”

Among the president’s opponents, reactions were of discouragement, with the possibility that Lula regaining political rights could increase the polarization in the country and help re-elect Bolsonaro.

“The extremes celebrate, as they nourish each other,” wrote former Bolsonaro Health Minister Luis Henrique Mandetta, himself a 2022 pre-candidate.

In the left-most wings aligned with Lula, Fachin’s judicial decision was received with excitement and interpreted as a sign of an automatic candidacy of the former president.

Guilherme Boulos, who ran for president in 2018, said the decision “comes three years late but dismantles the farce that elected Bolsonaro.” According to him, the decision “does not give strength to Bolsonaro, but to Brazilian democracy.”

In Brazil’s Congress, the Speaker of the Chamber of Deputies, Arthur Lira, defended that Fachin’s decision does not result in the “acquittal” of former judge Sergio Moro in suspicion cases.

“My biggest doubt is whether the decision was to acquit Lula or Moro,” Lira wrote on his social media accounts. “Lula may even deserve it. [But] Moro, never!”

Lira was the target of Operation Car Wash in 2017 and is a defendant for passive corruption in a second lawsuit.

'Turkey ready to cooperate with Iraq on PKK'