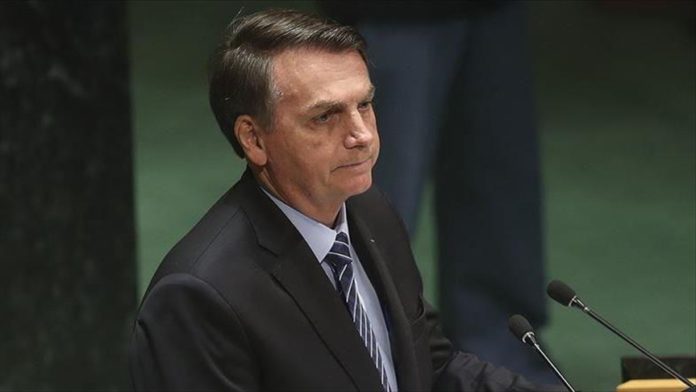 After suggesting that COVID-19 vaccines could turn people into crocodiles, Brazil’s president now blames pharmaceutical companies for not presenting proposals to the local regulator ANVISA in an attempt to justify his administration’s delay in starting a vaccination plan.

Jair Bolsonaro said on Monday “laboratories are the ones that should be interested in selling the vaccine,” stating that the 210-million inhabitants country is “a huge consumer market”.

“People say I have to go after [the companies]. No, who wants to sell [have to sell]”.

Bolsonaro also suggested that anyone who was infected with the coronavirus should not get the vaccine.

Meanwhile, Pfizer said in a statement that it will not submit an application for emergency use of its vaccine in Brazil.

According to the pharmaceutical company, the criteria required by ANVISA demand “specific time and statistical assessments” for Brazil, unlike other countries.

“Other regulatory agencies that have the emergency use process analyze the data from the studies in their entirety, without asking for a cutout to assess specific populations,” the statement reads.

The company also said that its immunizer, developed in partnership with BioNTech, will be presented in a “continuous submission process,” which it believes to be “the fastest in this moment”.

While neighboring Argentina and Chile have already started to vaccinate, the Brazilian plan does not yet have a date and the start forecast has already undergone at least four changes: December, January, February and March have been suggested for a kick off.

In Latin America, Costa Rica and Mexico have also started their COVID-19 vaccination campaigns. Peru and Ecuador have signed agreements to purchase vaccines.

So far, Brazil has agreements to acquire 142.9 million doses. Of this total, 100.4 million would be bought from the Oxford/AstraZeneca partnership, with 1 million doses expected to arrive on Feb. 8.

Another 42.5 million would be bought through WHO’s Covax Facility alliance. In 2021’s second half, Fiocruz is expected to produce an additional 160 million doses locally.

The country negotiates with Pfizer/BioNTech the purchase of an additional 70 million doses, but the pharmaceutical company expects to deliver only a maximum of 8.5 million doses in 2021.

The Sao Paulo government intends to start vaccination on Jan. 25, with 10 million doses of Sinovac’s CoronaVac already in Brazil, although it is uncertain whether ANVISA will be able to regulate it by then.

Bolsonaro’s administration says it should include other laboratories, like Chinese Sinovac, Russian Sputnik V, Indian Bharat Biotech, and Janssen-Cilag.

In view of a great increase in COVID-19 cases in Amazonas’s capital, Manaus, northern Brazil, two hospitals have set up external tents for screening patients.

Similar structures were used in local health units at the peak of the pandemic, between April and May.

According to Manaus City Hall, the average number of daily burials has increased to 45 in December, but the state government authorized the reopening of non-essential businesses after a wave of protests against the closure over last weekend.

Brazil registered 18,570 deaths from COVID-19 in December alone, until Tuesday, the highest monthly figure since September and a 40% rise in relation to November.

It is the first time since July that the number of deaths in a month is greater than that seen in the previous month. Experts expect the situation to worsen further in January.