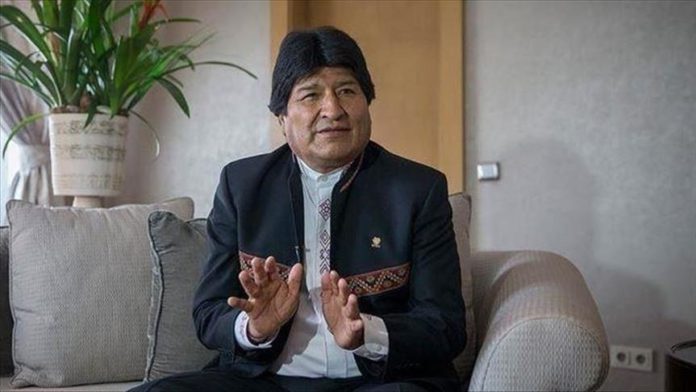 Bolivia’s former President Evo Morales said he will “abide” by a court’s decision that rejected his bid for a Senate seat in elections in October.

“Under threats and pressure from processes, the adjudicator made an illegal and unconstitutional political decision. History shows that they may be able to disable Evo but they will not be able to outlaw the people,” Morales said on Twitter late Monday.

“We will abide by that decision because our commitment and priority is that the people come out of the crisis,” he said.

He emphasized that his Movement for Socialism (MAS) party “will not fall into any provocation” and “the people will once again govern themselves, peacefully and democratically.”

Morales’ remarks came hours after a court upheld a previous Electoral Tribunal’s ruling to block his Senate candidacy in February.

The former president also backed his Ecuadorian counterpart, Rafael Correa, who was recently disqualified from running in presidential elections in that country.

“Ecuadorian justice hastens a sentence against the brother @MashiRafael with the political objective of banning him as a candidate for the elections,” he tweeted Tuesday. “They do not realize that it is impossible to outlaw peoples.”

Ecuador’s National Court of Justice rejected an appeal by Correa to annul an eight-year prison sentence because of a bribery case, barring him from running as a vice president candidate in elections in 2021.

Venezuela’s President Nicolas Maduro expressed support for Morales late Monday by tweeting: “Brother Evo! The fascists know that you have the majority support of the Bolivian people, that is why they prevent your candidacy for the Senate. They will not be able to stop the strength of a people that woke up from centuries of oppression and that is determined to be free. Long live Bolivia!”

Meanwhile, the Simon Bolivar Institute of Venezuela slammed the decisions against Morales and Correa, claiming “the Latin American right has in an articulated manner taken measures that violate the political rights” of former leaders and “they prevent the peoples of Bolivia and Ecuador from freely exercising their will. “

“Sad day for democracy!” the institute said on Twitter.

After weeks of upheaval, Morales resigned under pressure from the military last year and is now living in exile in Argentina.