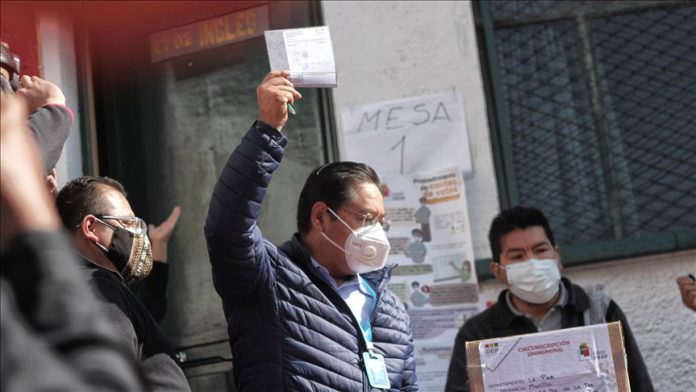 Exit polls showed that Bolivian left-wing presidential hopeful Luis Arce, a candidate of the party of former President Evo Morales, won the presidency in the South American country with 52% of the vote.

Morales announced Arce would be the next president of the nation, according to the Movement for Socialism (MAS) party’s ballot-counting system.

“Brothers of Bolivia in the world, Lucho will be our president. He will contribute to our homeland, to the path of economic, political and social development and especially to economic growth. In the distance, I want to send my brothers Lucho and David my most sincere congratulations,” he said at a press conference in Argentina’s capital Buenos Aires, where he has lived in exile since 2019.

Besides Arce and his running partner, vice presidential candidate David Choquehuanca, Morales also congratulated newly elected lawmakers, as well as the social movements and supporters of the MAS, thanking them for their commitment.

“Sisters and brothers, the will of the people has been imposed. There has been a resounding victory for the MAS-IPSP,” Morales said. “Now, we are going to restore dignity and freedom to the people.”

Morales was deposed in what he calls a ”coup” after he was denied a fourth term in the follow up of last year’s election. Bolivia since then has been ruled by an interim government and the ex-president is in exile in Argentina.

The news came just after midnight in the midst of slow official scrutiny that has caused uncertainty.

“We still do not have an official count, but from the data we have, Mr. Arce and Mr. Choquehuanca have won the election. I congratulate the winners and ask them to govern with Bolivia and democracy in mind,” she said on Twitter.

The official count had tallied just over 2% of votes by around 11.00 p.m. local time (0400GMT), while preliminary results were not available from expected exit polls. Morales criticized polling companies for taking too long to publish the unofficial results.

“Polling companies refuse to publish the exit polls. They are hiding the great triumph of the people represented by the MAS-IPSP,” he said on Twitter.

Minutes later, Unitel announced that it would publicize the results of the exit poll at midnight.

The Supreme Electoral Court said the official results would be available later in the week and called for patience until the vote count was complete.

International observer missions have also called on the Bolivian people to wait for the official result, which could take several days.

Meanwhile, the Organization of American States expressed “its deepest appreciation to the Bolivian people for the civic attitude demonstrated today, by massively and peacefully exercising their right to vote and having done so in a responsible manner.”

The body said it is carrying out the vote count and the next few days would be “crucial” for the future of Bolivia.

*Beyza Binnur Donmez from Ankara contributed to the story

Afghans accuse Iranian forces of abuse before being released at Turkey...