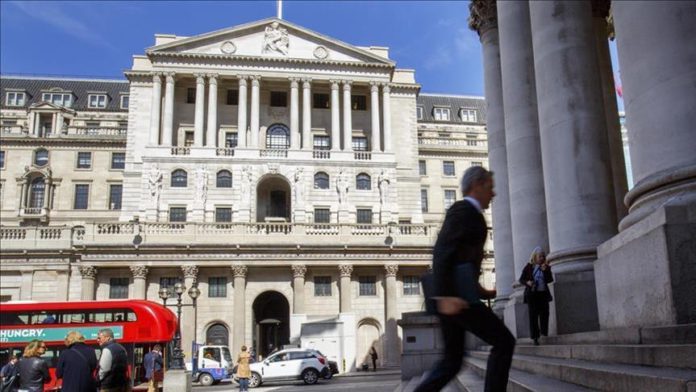 The Bank of England (BoE) on Thursday left its monetary policy unchanged and maintained the bank’s lending rate at 0.1%, in line with market expectations, but said it expects higher inflation in the near term.

“The economy is projected to experience a more pronounced period of above-target inflation in the near-term than expected,” the UK’s central bank said in a statement after the conclusion of its Monetary Policy Committee meeting.

The BoE raised its forecasts for Consumer Price Index (CPI) inflation, which measures changes in the price of goods and services from a consumer perspective.

“CPI inflation is projected to rise temporarily in the near term, to 4% in 2021 Q4, owing largely to developments in energy and other goods prices, before falling back to close to the 2% target,” the statement said.

“Twelve-month CPI inflation had risen from 2.1% in May to 2.5% in June, 0.8 percentage points higher than projected in the May Report,” it noted.

The central bank noted that it will continue its existing program of the UK government bond purchases at £875 billion ($1.2 trillion) with the total target stock of asset purchases at £895 billion.

BoE said the UK economy is estimated to have expanded by 5% in the second quarter of this year, which is around 4% below its pre-pandemic level.

The bank said the economy is anticipated to grow by around 3% in the third quarter and reach its pre-pandemic level in the fourth quarter “with demand growth boosted by a waning impact from Covid.”