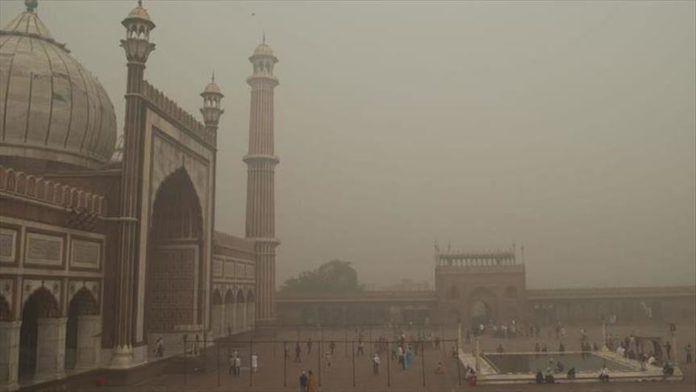 Soon after India enforced a lockdown to stem the spread of COVID-19 this March, halting industrial activity, residents in the capital Delhi were thrilled to see clear blue skies and twinkling stars for the first time in several decades.

Now with the onset of winter, coming with a drop in temperature, coupled with the resumption of industrial activity and stubble burning by farmers in neighboring states, the air quality in the city has once again fallen to poor levels over the past week.

The city’s air quality index continued to remain in the “poor “zone on the fifth consecutive day on Sunday, leading the experts to demand long-term plans and enforcement of measures to tackle the problem.

“Solutions are all known and are also part of the longer-term action plan [to solve the problem]. The challenge, however, lies in the scalability and stringency of enforcement of the measures,” Anumita Roychowdhury, an air pollution expert and executive director at the New Delhi-based Center for Science and Environment, told Anadolu Agency.

She said some of the measures can be implemented in the short run as an emergency response to control winter pollution.

Roychowdhury said their analysis “this year shows that after the blue-sky experience during the [coronavirus] pandemic linked to lockdown phases and the monsoon months, pollution levels have started to rise again due to the opening up of the economy.”

Tanushree Ganguly, program associate at the Council on Energy, Environment and Water in New Delhi, said there has been an increase in particulate matter (PM) 2.5 concentrations in the city of Delhi since the start of September.

“Since Sept. 27 the daily average PM2.5 concentration in Delhi has consistently exceeded the national 24-hour standard of 60 ug/m3 [micrograms of gaseous pollutant per cubic meter of ambient air]. While the rise in PM levels coincides with crop fire incidences in Punjab and Haryana, estimates by urban emissions suggest that the contribution of open fires to Delhi’s PM 2.5 concentration is less than 10% at present,” said the expert.

The government of Delhi has already announced several measures, including deputing officials with anti-smog guns to fight the pollution in the Indian capital.

“Dust management and increased vigilance are measures in the right direction but the government needs to look at more long-term solutions like augmenting public and non-motorized transit infrastructure in the city,” said Tanushree. She added that in the long run, the government needs to explore ideas like congestion pricing to restrict the usage of private vehicles in the city.

A study conducted by Council on Energy Environment and Water found that mission from transport followed by industries, power plants (outside Delhi), stubble burring, industries, road and construction dust are the primary contributors to Delhi’s pollution.

“We should avoid blaming each other and work in coordination with various stakeholders to avoid high air pollution episodes we may face in the coming few weeks. The issue of crop residue burning needs to be addressed through multiple sustainable approaches and by engaging farmers,” said Khaiwal.

With the air pollution levels starting to worsen in the capital, many residents are thinking of shifting to another place to spend winter months.

“As soon as the winter sets in, this becomes a discussion in our family whether we should shift to another city for winter months. Shockingly, the government has failed to bring an end to this problem, so many people die because of the pollution,” said Prashant Kumar, a Delhi resident.

A study entitled State of Global Air 2019 had found that in 2017, pollution contributed to over 1.2 million deaths in India.

The central government has allotted a fund of 17 billion rupees ($231 million) to the states to manage stubble in the fields and discourage farmers from burning it.

“Currently, 80% subsidy to cooperatives and 50% subsidy to individuals to procure machinery to manage stubble is being provided to curb pollution” Indian Environment Minister, Prakash Javadekar to a meeting, called to discuss air pollution on Oct. 1.

In January 2019, his ministry had launched a National Clean Air Program (NCAP) to tackle the issue comprehensively with a target to achieve 20 to 30% reduction in pollution level by 2024. He said that the Delhi government has been directed to take more action on the 13 hotspots to reduce air pollution.

Roychowdhury said that the city of Delhi requires adequate municipal infrastructure for waste segregation, safe disposal and recycling so that open burning of waste can be fully prevented. She also asked for upgrading the transport infrastructure.

According to pulmonologist Dr. Digambar Behera, the air pollution along with COVID-19 complicate things, as the pandemic cases continue rising in the country. India has so far reported over 7.17 million COVID-19 infections with more than 109,000 deaths.