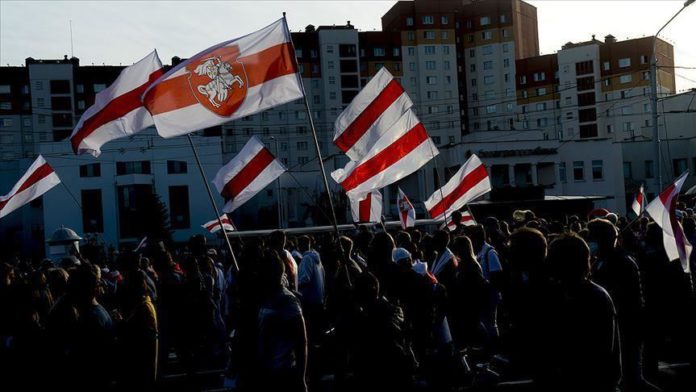 The Greek Cypriot administration of Southern Cyprus was criticized by many European countries for its veto on sanctions against Belarus at Monday’s EU Foreign Affairs Council meeting, citing the bloc’s “inaction” against Turkey.

Latvia’s Minister of Foreign Affairs Edgars Rinkevics said in a tweet Monday that the decision sends a wrong signal to Belarusians and the world.

“It is regrettable that today we could not decide on sanctions on violations of human rights there due to ‘a hostage taking’ by a member state,” he wrote.

The EU has stood with the opposition refusing to recognize Lukashenko as the democratic leader of Belarus, accusing him of using force to quell peaceful protests.

Monday’s meeting was called to discuss placing sanctions on Belarus but the Greek Cypriot administration vetoed the decision saying the bloc must impose sanctions on Turkey over its energy exploration in the Eastern Mediterranean.

“Today’s failure to agree on sanctions in support of Belarusians, suffering & fighting for democracy, undermine credibility of democratic values they are fighting for,” he tweeted. “Some colleagues should not link things that must not be linked.”

Linkevicius also stated that his country will continue to insist on substantial actions.

Former Swedish Prime Minister Carl Bildt said that the meeting will be remembered for the blocking of sanctions on Belarus by the Greek Cypriot administration. He added: “It’s a rapidly growing credibility problem for the EU.”

Anthony Gardner, former US ambassador to the EU, also commented on the issue in a tweet, saying: “EU foreign policy aspirations will suffer a real blow if the EU can’t immediately step up with a unified view on Belarus.”

He added that they cannot let Russia’s dirty money float in Southern Cyprus.

EU foreign policy chief Josep Borrell said after the meeting the bloc failed to reach an agreement on sanctions on Belarus.

“And the issue will have to be considered by the heads of state and governments at the European Council later this week,” he added.