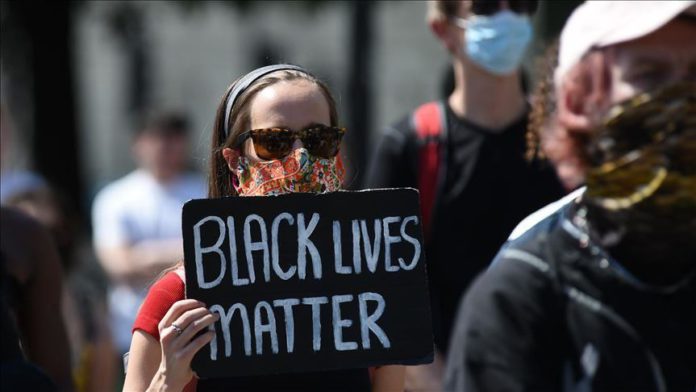 It has also brought out quiet crowds of mostly men dressed in camouflage, wearing heavy-duty tactical gear and armed with assault rifles walking openly on the streets.

And ask any of these vigilante militia members why they’re here, and they’ll all tell you: they’re only here to help.

“We’re here for some protection of personal property,” said Steve Cochran of The Oath Keepers right-wing militia on a tense night of protesting in Louisville, Kentucky last month.

“Personal people have asked us to be here,” he said, pointing to a pawn shop, a restaurant and a gas station.

A few blocks away, Quan Kaiser, a member of a mostly Black, left-wing militia called the United Pharaoh’s Guard, stood watch at a memorial for Breonna Taylor, heavily armed, and said simply, “We want to see justice.”

But militia members have no connection to law enforcement at all, despite their “military” look, and there’s no way to identify what their motivations are just by looking at them.

And they’ve upped the heat on BLM protests that had already turned violent.

Violence at those protests has helped drive support among Americans downward.

In May, the death of George Floyd under a Minneapolis police officer’s knee touched off fury around the country. Two weeks later, a Pew Research poll found that there was at least some support for the BLM movement among 67% of Americans.

By September, weary of the protesting and perhaps turned off by the property destruction, that support had dropped to 55%. Support specifically among Black Americans remained unchanged at 86%.

BLM demonstrations have been mostly peaceful around the country, and members of the group have decried much of the violence as the work of outside agitators and the left-wing group Antifa.

“The Black Lives Matter movement is being blamed for [the violence],” said Chauncey Body, a Black man in Kenosha, Wisconsin, who saw his predominantly Black neighborhood largely destroyed in rioting after the police shooting of a Black man, Jacob Blake.

But President Donald Trump and his campaign are squarely blaming BLM for the violence.

Within days of the Kenosha rioting, the Trump campaign started running TV commercials in Wisconsin accusing his Democratic challenger Joe Biden of “kneeling” to the Kenosha protesters and wanting to “de-fund” police departments. Biden has never called for that and has said that while he supports peaceful protests, those who riot should be prosecuted.

Still, Trump’s strategy is working for his voters in Wisconsin.

“The Black Lives Matter, all of that, what it stands for,” says Kathy Johnson, a Trump supporter who lives not far from Kenosha. “It doesn’t stand for Democrat anymore or Republican. It’s way bigger and really, really, really scary.”

Rise of the militias

The armed vigilante militia group The Oath Keepers came to prominence during the 2014 rioting in Ferguson, Missouri, after a Black man was shot dead by a police officer.

The Oath Keepers travel around the country to various protests, they say, to keep the peace.

But Cochran acknowledges that many of the local residents in these protest hot-zones don’t want militia members of ANY kind around — Black, White, left-wing or right-wing. “It’s true, it’s true,” he admits.

And their presence has proven deadly.

A self-styled teenage militia member, Kyle Rittenhouse, drove from his home in Illinois in August to join other militia members in Kenosha after a night of violent protests.

In an on-camera interview that, by chance, he happened to give right before the shootings, Rittenhouse told a reporter that it was his “job” to protect property in Kenosha; in fact, he wasn’t employed by anyone. His Facebook profile told the story of a boy who idolized police officers. He’s now charged with two counts of murder.

Warnings from the government

The head of the FBI testified in September that racially-motivated violent extremism poses the biggest domestic terrorism threat in the country. The director of the Homeland Security Department has testified to much the same: that white supremacist extremists are the most persistent and lethal threat among domestic terrorists.

Not all vigilante militia members across America are necessarily white supremacists, but the link is strong. In early October, over a dozen militia members, some called the “Wolverine Watchmen,” were charged in Michigan with plotting to storm the State Capitol in Lansing and kidnap and kill the Governor, Gretchen Whitmer. Prosecutors say besides their anger over Whitmer’s coronavirus lockdown orders, the militia members had overtly racist motivations.

President Trump has tried to walk a tightrope with militia members who support him and Americans who are horrified by the threat they pose. At the first presidential debate with Biden, Trump was asked to condemn the white supremacist militia group the Proud Boys. He first feigned ignorance about the group, then told them to “stand back and stand by,” which the group started using as a call of honor. Two days later, Trump said he “condemned” the group.

But as white militias have risen, so too has another, more diverse militia.

The United Pharaoh’s Guard (UPG) is a mostly Black militia whose GoFundMe page describes their purpose: “to protect protestors, patrol neighborhoods and keep the peace.”

The UPG says they formed in Louisville, and over the summer, they formed a long line of Black men armed with assault rifles, standing outside Louisville’s famed Kentucky Derby horse race.

At the memorial for Breonna Taylor, a young Louisville woman shot dead by police, Quan Kaiser, a member of the UPG, says that sight may have been unsettling for white Americans, but “it’s our Second Amendment right [gun ownership] and we got the same rights as anyone else. We come armed, to not be infringed, and against tyranny.”

Social media chatter in recent weeks has alarmed election officials in several states: right-wing militia members are encouraging each other to show up outside voting sites on Election Day, November 3rd.

President Trump has called for his supporters to “watch the polls.”

But election officials want to make sure only registered “poll watchers,” who are under strict rules, do the “watching” and not “intimidating.”

The state governments of New Jersey, Michigan and Rhode Island are putting in place security measures to keep voting sites clear of intimidation. Michigan’s Secretary of State has announced a ban on open-carry weapons at or near voting sites.

But just last week, The Oath Keepers announced that they would, indeed, be showing up at various voting sites around the country, and, as always, armed.