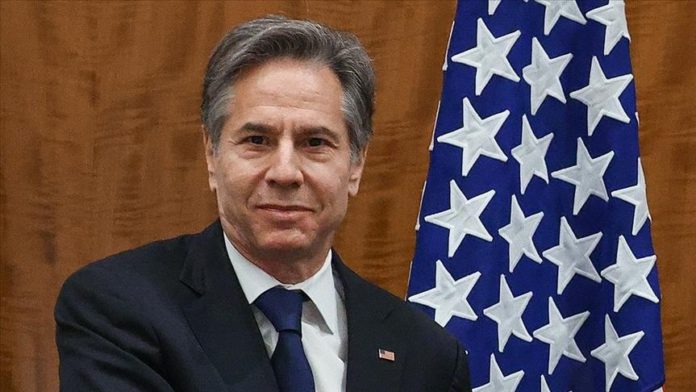 US Secretary of State Antony Blinken said Tuesday that a meeting planned for Thursday with Russian Foreign Minister Sergey Lavrov in Geneva has been canceled following Moscow’s recognition of two breakaway regions in Ukraine.

“Now that we see the invasion is beginning and Russia has made clear its wholesale rejection of diplomacy, it does not make sense to go forward with that meeting at this time,” Blinken said during a joint press conference with Ukrainian Foreign Minister Dmytro Kuleba at the State Department.

Blinken said he sent Lavrov a letter informing him about the cancelation.

“The United States and I personally remain committed to diplomacy if Russia is prepared to take demonstrable steps to provide the international community with any degree of confidence that it is serious about de-escalating and finding a diplomatic solution.

“We will proceed in coordination with our allies and partners based on Russia’s actions and the facts on the ground,” he added.

Blinken and Lavrov were scheduled to meet provided that Russia did not further invade Ukraine, but in a speech Monday, Russian President Vladimir Putin recognized Ukraine’s breakaway regions of Donetsk and Luhansk in eastern Ukraine as independent states.

Blinken called Putin’s speech “deeply disturbing,” saying that “his statements today made clear to the world how he views Ukraine, not as a sovereign nation with the right to territorial integrity and independence, but rather as a creation of Russia, and therefore subordinate to Russia.”

Kuleba, for his part, said Ukraine “strongly” believes that the time for imposing sanctions on Russia and its leadership is now, to prevent a further invasion.

“The world must respond with all its economic might to punish Russia for the crimes it has already committed and ahead of the crimes it plans to commit. Hit Russia’s economy now, and hit it hard,” he said.