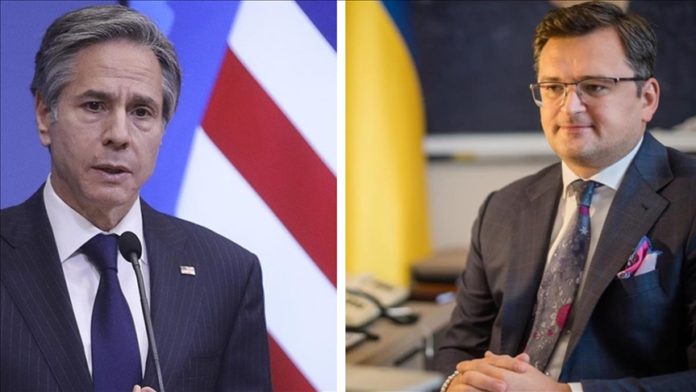 US Secretary of State Antony Blinken had a telephone call Friday with Ukrainian Foreign Minister Dymtro Kuleba amid what Washington called an “acute threat” of a potential invasion by Russia.

Blinken reaffirms the US’ “robust support for Ukraine in the face of an increasingly acute threat of possible further Russian aggression,” said State Department spokesman Ned Price in a statement. “The Secretary underscored that any and all aggression against Ukraine by Russia will be met with swift, severe, and united consequences.”

The call came hours after US President Joe Biden’s National Security Advisor Jake Sullivan warned of an imminent attack from Russia against Ukraine and urged Americans to leave in 48 hours.

The two diplomats also discussed global efforts to urge de-escalation and enhance defense and deterrence measures against a Russian buildup near Ukraine.

Blinken “reinforced that Ukraine continues to have the United States’ enduring and steadfast support for its sovereignty and territorial integrity,” said Price.

Russia has denied it is preparing to invade and accused Western countries of undermining its security by NATO’s expansion toward its borders.

The Kremlin also issued a list of security demands to the West, including a rolling back of troop deployments from some ex-Soviet states and guarantees that Ukraine and Georgia will not join NATO.