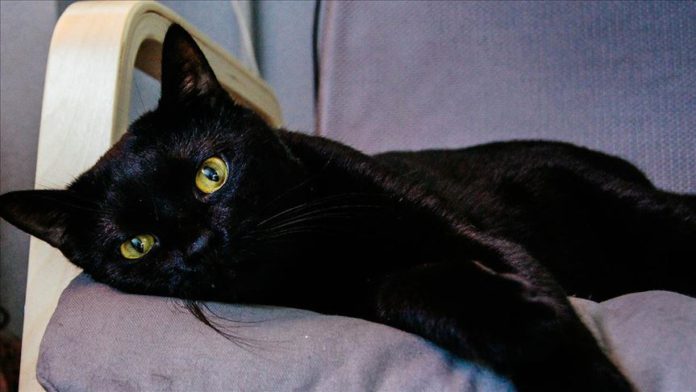 The cat, in general, is celebrated Aug. 8, and international day is dedicated Aug. 17 to the black cat.

This is because throughout the world the species a victim of all kinds of beliefs. This is also the case in Cameroon where Anadolu Agency spoke to people to understand their relationship with cats.

“When I was little I was afraid to see a black cat, especially at night because of all the bad things that were said,” said Jean Paul Mbarga.

Like Mbarga, Amadou Garba in his childhood perceived the black cat with great fear. Today, many of his beliefs have not changed.

“Around me people continue to speak badly about it in witchcraft stories,” he said.

The black cat remains “an enigma,” to him.

Others like Cameroonian politician and traditionalist Jean Marc Ngoss, said it is better to not sweep aside beliefs.

“Ancestors who gave rise to these beliefs around the black cat were not madmen. Rather, it is the new technologies that are contributing to the doubts,” he said.

“The world exists with codes, there’s no point in playing the unbeliever because the world is a whole. Not knowing mystical things should not lead us to deny them because they exist. The misfortune of humanity is often to think that what we don’t see, doesn’t exist,” he argued about mystical beliefs about the black cat.

“Since our ancestors and parents began to stigmatize a black cat sighting, especially in the dark night, it is certainly after a good number of experiences. There have certainly been ancestors who experienced harmful events many times after meeting a black cat. They have come to the conclusion it is a bad omen,” said Ngoss.

If he goes anywhere at night and sees a black cat, Ngoss will turn back.

“I am certain that if I go ahead in spite of everything, misfortune will await me ahead,” he said.

Other people approached by Anadolu simply prefer to see the cat as good meat to be eaten regardless of color. And for some it is a “must” to eat to be lucky and have the same strength and agility of a cat.

So many stereotypes are cultural and must be fought, said Saleh Adamou, a Cameroonian veterinarian.

“To my knowledge, the black cat is not particularly different from other cats. It is probably its color that creates stereotypes. Those are cultural,” he said. “Currently there are fewer black cats that you see among people and even in the wild population. This can also be explained by selection. Of course people don’t prefer to have black cats and some riverine populations kill them.”

Ngalle Felicite changed her view of black cats as she grew older and today she does not discriminate between cats.

“It’s true that as a child, I was also very afraid of cats. But the black cat in particular. When I became an adult, we had to have cats against the rats that came to our house. That’s how I learned to live and especially loved cats. I had a black one that I grew up with. It got very big and was my favorite,” she told Anadolu Agency.

She said, however, that visitors were very afraid of her cat and she was viewed as “a bit strange.”

“And yet of all the cats I’ve ever had, my relationship was very special with this black cat. It followed me everywhere and jumped on my lap whenever he found me sitting. It would also come and lie next to me all the time. My cat disappeared one day without me knowing how,” she added. She believes the car was tricked into being eaten.

For Adamou, education would be a good remedy to end negative beliefs about the black cat and encourage adoption.

“I think we need to raise awareness against this discrimination. We must kill by all possible channels these stereotypes that make the black cat an animal of misfortune,” said the veterinarian.