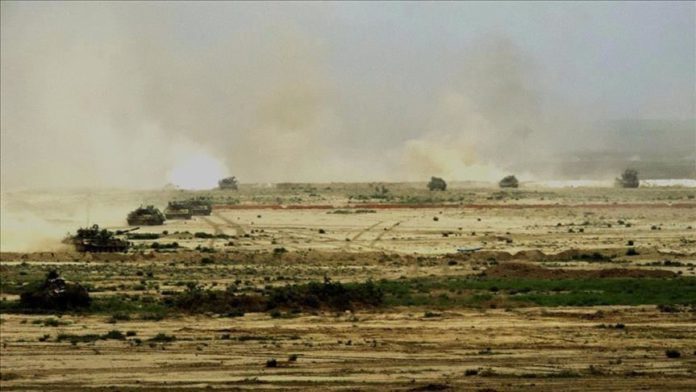 Twenty-six years on, the Bishkek Protocol signed between Azerbaijan and Armenia to end armed conflict remains confined to a piece of paper.

After the Armenian invasion of Nagorno-Karabakh and surrounding provinces in 1991-1993, a cease-fire protocol was signed in 1994.

However, neither the guns stopped blazing, nor any progress was made toward a permanent solution.

The Nagorno-Karabakh conflict started after the disintegration of Soviet Union, followed by Armenians claiming rights in the region. Armenians invaded Khankendi, Khojaly and Shusha in 1991-1992. In 1993, they also invaded Lachin, Khojavend, Kalbajar, Aghdara and Agdam, which were followed by Jabrayil, Fizuli, Qubadli and Zangilan provinces.

Some 20% of Azerbaijan’s land was invaded, while 1 million people were displaced from their motherland.

Following negotiations on May 4-5, 1994 in Bishkek, with initiatives of the Commonwealth of Independent States Interparliamentary Assembly, Kyrgyzstan and Russia, the warring parties signed the cease-fire known as Bishkek Protocol.

The protocol stipulated that the parties would sign a treaty to reach a cease-fire by May 12, 1994, retreat forces from reserved areas, reinforce infrastructure and create a mechanism to enable the return of refugees.

The protocol was signed in Baku on May 8, after the head of parliament made some changes. The word “reserved” was replaced with “invaded”.

The protocol foresaw a detailed deal in the future. However, the peace treaty mentioned in the protocol never saw the light of the day.

Although larger attacks and operations ended after the protocol, the cease-fire remained on paper for 26 years and both parties lost thousands of soldiers, although no official numbers were announced.

Minsk Group of Organization for Security and Co-operation in Europe (OSCE), founded to solve the crisis, has not put forward a solution yet.

Russian, French and American co-chairs of the group, occasionally visiting both countries, have limited themselves to urging both parties to not violate the cease-fire.

Azerbaijan has added a condition for the peace process to begin; retreat of Armenian soldiers from the invaded areas.

Since the first day of the conflict, Turkey supports Azerbaijan, referencing international law and the related UNSC decisions.

Turkey’s President Recep Tayyip Erdogan, along with many state officials, repeatedly call on Armenia to stop invasions. Officials say unless the land of Azerbaijan continue being invaded by Armenia, it will be impossible to have diplomatic relations with Armenia.

Because a peace treaty was never signed after the cease-fire in 1994, Azerbaijan and Armenia are still in conflict.

Due to continuous armament of both parties, it seems that the hundred-year-old Nagorno-Karabakh problem is poised to affect the future of both countries.

Coronavirus claims another 185 lives in Iran