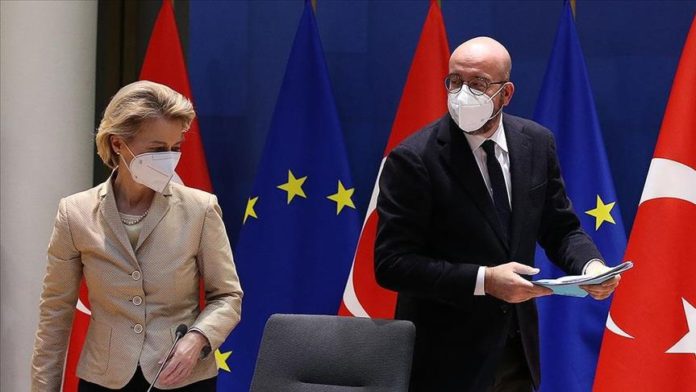 A host of critical issues, including the Eastern Mediterranean, Cyprus, immigration, and economy, are expected to be discussed during Tuesday’s visit to Turkey by top EU leaders.

After the EU summit of March 25-26 set the goal of a positive trend in Turkish-EU relations, EU Commission President Ursula Von der Leyen and EU Council President Charles Michel are due in Turkey for an official visit.

In meetings with President Recep Tayyip Erdogan and other officials, top topics during the visit include cooperation on migrants, updating the 2016 EU-Turkey deal and 1995 Customs Union, visa liberalization, restarting high-level dialogue between the EU and Turkey, as well as the Eastern Mediterranean and Cyprus.

Following Erdogan’s recent declaration that Turkey sees its future nowhere but the EU, diplomatic efforts to forge a positive approach in the relations intensified.

The March EU leaders’ summit decided to strengthen cooperation with Turkey in the areas of the economy, migration, and person-to-person relations. Moreover, the EU expressed its readiness to improve Turkish-EU ties in a gradual, proportional, and reversible way.

Some of the expected hot topics of Tuesday’s visit include:

– 2016 Turkey-EU deal on stemming the flow of irregular migrants: Turkey supports updating the deal and expects the EU to fulfill its financial obligations under the agreement,

– Visa liberalization: Turkey expects the EU to keep its promises under the 2016 deal.

Turkey has also reiterated that it is firmly committed to the reform agenda necessitated by the accession process and expects the EU to show an unbiased, constructive approach and remove the political hurdles to chapters of the accession negotiations.