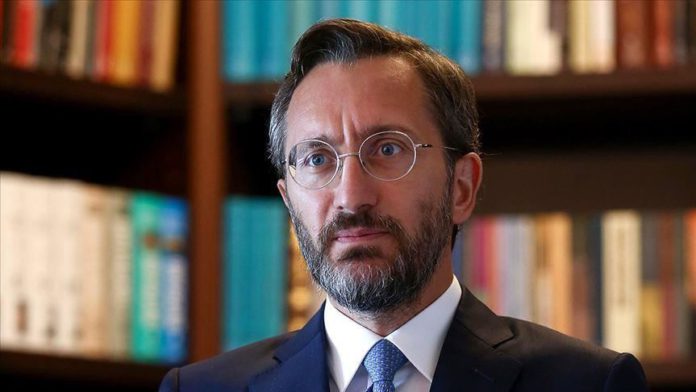 Turkey on Saturday slammed remarks by the presumptive US Democratic presidential candidate calling for Washington to interfere in domestic Turkish politics.

“US Presidential candidate Joe Biden’s remarks (made in December but reported by the media today) reflect the games being played over Turkey and their interventionist attitudes,” Fahrettin Altun, the head of Turkey’s Communications Directorate, wrote on Twitter in English.

“These remarks are not in line with democracy and the nature of Turkish-American relations,” he added.

The current US administration would find these “undiplomatic remarks unseemly of a presidential candidate” in a NATO ally, said Altun, adding that Turkey is not to be made into other countries’ domestic political fodder.

He underlined that US political institutions and the public should “disregard these irresponsible statements,” clearly intended to score domestic political points.

“On top of all this, it’s sad (though not surprising) that the opposition politicians in our country have yet to denounce these remarks that raise questions in the minds of our people and are insulting to the Turkish nation’s democratic will and sovereignty,” said Altun.

Turkey will not allow its democratic politics to be disturbed by such “irresponsible” statements, said Altun.

“Our country will continue our national struggle under the leadership of our President Recep Tayyip Erdogan,” he added.

In the remarks – first reported a few hours ago, but apparently made to the New York Times editorial board for a January episode of the FX documentary series The Weekly – Biden calls for the US to try to interfere in Turkish domestic politics, saying it should take sides, and that in the past he, in his role as vice president, had actually done so.

Biden also implied he would involve the US directly into domestic Turkish affairs.

“What I think we should be doing is taking a very different approach to him [Erdogan] now, making it clear that we support opposition leadership,” he said.

He added: “I’m still of the view that if we were to engage more directly like I was doing with them, that we can support those elements of the Turkish leadership that still exist and get more from them and embolden them to be able to take on and defeat Erdogan. Not by a coup, not by a coup, but by the electoral process.”

The last remarks seem to refer to the 2016 defeated coup in Turkey by the Fetullah Terrorist Organization – whose leader lives in the US, despite years of Turkish requests to extradite him – and which martyred 251 people and injured nearly 2,200.

In the US presidential race, Biden is currently leading in most polls, but the Nov. 3 election is still months away.